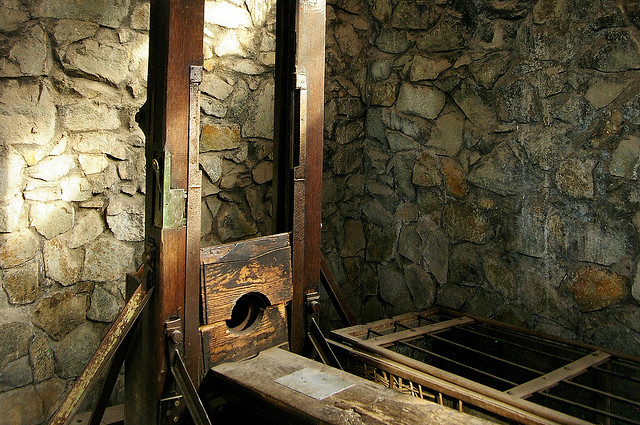 Bringing back the guillotine may sound crazy, but it’s certainly better than the current alternative. It’s better for prisoners because quickly severing the head is believed to be one of the quickest, least painful ways to die. And it’s better for organ recipients because the bodies of guillotined prisoners could be more quickly harvested for viable parts, unlike organs that may become unusable after lethal injection due to hypoxemia. …

Dr. Jay Chapman, the creator of the three-drug cocktail, supports ditching his 1977 invention due to its reputation for causing slow, painful deaths. “The simplest thing I know of is the guillotine,” he told CNN in 2007. “And I’m not at all opposed to bringing it back. The person’s head is cut off and that’s the end of it.” Other doctors have stuck their necks out by protesting lethal injection on the grounds that administering it requires medical professionals to violate the Hippocratic Oath. The American Medical Association officially discourages physicians from participating in lethal injections.

The guillotine sidesteps any Hippocratic hypocrisy. The layman can operate a guillotine just as well as a doctor. As Hanni Hindi wrote in Slate some years ago, “The prisoner facing the guillotine was placed facedown on a large wooden plank, their head secured in a brace and steadied by an executioner’s assistant known as ‘the Photographer,’ who held onto their hair (or, in the case of bald prisoners, their ears). When everything was in place, a 120-pound blade was dropped from 7 feet in the air, immediately severing the prisoner’s head.” It never misses its mark.