Sorry for missing the Best of the Dish Today deadline last night. I was giving a speech on conservatism at Eastern Michigan University, and the conversation didn’t stop.

I prepped by re-reading parts of my friend Jesse Norman’s terrific book on Edmund Burke: The First Conservative. I was reminded again of 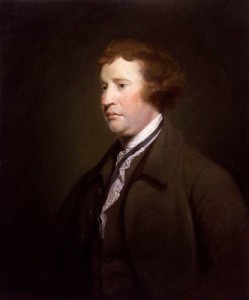 how routinely and extravagantly Burke was ridiculed and mocked in his time for his alleged contradictions: supporting the American colonists then unleashing a barrage of brio against the French revolution, a British MP defending the rights of Catholics in Ireland, a patriot obsessed with colonial abuses of power, and an enemy of empire .

He was not a reactionary and yet remained a skeptic of unbridled liberal aspirations to improve society. He was a conservative Whig, and a liberal conservative. It’s that prudential balance – partaking of both traditions in Anglo-American thought and practice, and tacking toward one or to the other depending on the specific circumstances of time, people and place that makes him, in my mind, a conservative.

For a conservative should not be implacably hostile to liberalism (let alone demonize it), but should be alert to its insights, and deeply aware of the need to change laws and government in response to unstoppable change in human society. Equally, a liberal can learn a lot from conservatism’s doubts about utopia, from the conservative concern with history, tradition and the centrality of culture in making human beings, and from conservatism’s love and enjoyment of the world as-it-is, even as it challenges the statesman or woman to nudge it toward the future. The goal should not be some new country or a new world order or even a return to a pristine past that never existed: but to adapt to necessary social and cultural change by trying as hard as one can to make it coherent with what the country has long been; to recognize, as Orwell did, that a country, even if it is to change quite markedly, should always be trying somehow to remain the same.

That is rooted simply in a love of one’s own, in feelings of pride in one’s country or family or tradition. And unlike liberalism, conservatism does not shy from these sub-rational parts of what being human is. They are not to be conquered by sweet reason, because they cannot be. They need to be channeled, not extinguished, guided not fetishized. A conservative will be a patriot, but not a nationalist. He will be proud of his own country but never tempted to argue that it is a model for all humankind, or that it can be exported to distant, different places with vastly different histories.

This means a true conservative – who is, above all, an anti-ideologue – will often be attacked for alleged inconsistency, for changing positions, for promising change but not a radical break with the past, for pursuing two objectives – like liberty and authority, or change and continuity  – that seem to all ideologues as completely contradictory.

But they aren’t. Churchill, in his great essay, “Consistency in Politics” wrote of Burke:

On the one hand [Burke] is revealed as a foremost apostle of Liberty, on the other as the redoubtable champion of Authority. But a charge of political inconsistency applied to this life appears a mean and petty thing.

History easily discerns the reasons and forces which actuated him, and the immense changes in the problems he was facing which evoked from the same profound mind and sincere spirit these entirely contrary manifestations. His soul revolted against tyranny, whether it appeared in the aspect of a domineering Monarch and a corrupt Court and Parliamentary system, or whether, mouthing the watch-words of a non-existent liberty, it towered up against him in the dictation of a brutal mob and wicked sect.

And the same, of course, can be said of Churchill, a member at one time of both the Liberal and the Conservative parties in Britain, often misunderstood, even now somewhat disdained in his own country as a necessary blowhard. But a true conservative will defy the label of party and of ideology as well as a foolish consistency, when times shift.

In trying to figure out where American conservatism can now go, reading Jesse’s book, and thinking about Burke, would be a little more productive than constructing new amendments to the Constitution, or figuring out how to repeal the New Deal, or declaring too precipitous a lurch toward non-interventionism. The First Conservative would, I suspect, look at the current Tea Party, for example, with the same baffled disdain that he viewed all reactionary, radical populisms. And he would urge a new moderation and pragmatism in tackling the specific problems of 2013 – not 1980, let alone 1780 – and finding a way to solve them that makes America more like America – because he loves America – and not less.