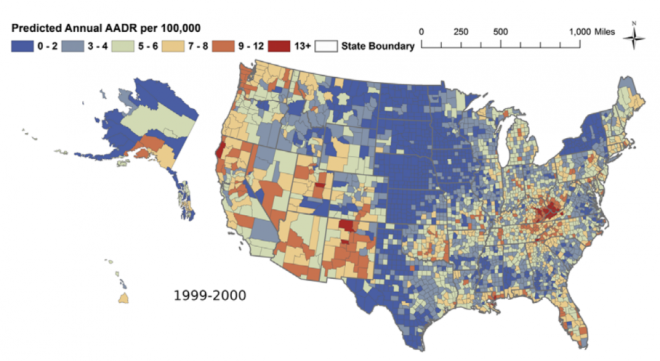 Shaunacy Ferro points to a new study that shows that since 1999, “the rise in drug deaths hasn’t been evenly spread out across the country, but has gone up most dramatically in rural areas”:

In 1999, only 3 percent of U.S. counties had an annual drug death rate of more than ten people per 100,000. By 2008, 54 percent of counties did. However, the increase has been most dramatic for rural populations, which according to the CDC have some of the highest rates of prescription drug abuse and overdose. Rural counties saw higher increases in age-adjusted death rates between 1999 and 2009. As you can see, the maps show about the same death rates for rural and urban populations in 2008-2009, but most rural areas started out with significantly lower drug deaths than urban areas back in 1999.

Jason Koebler looks at the data and sees more than just a “rural” problem:

The CDC and law enforcement groups say that much of that increase has been driven by the availability of prescription opioids such oxycodone and anti-anxiety drugs. The abuse of prescription painkillers are often seen as a “rural” problem, but data broken up by county suggests that cities have almost as much to worry about.

Between 1999 and 2009, drug poisoning deaths grew by 394 percent in rural areas and 279 percent for large metropolitan areas, according to the CDC’s county-level look at the data. The highest death rates from overdoses occurred in heavily populated areas, according to the study, published Tuesday in the American Journal of Preventative Medicine.