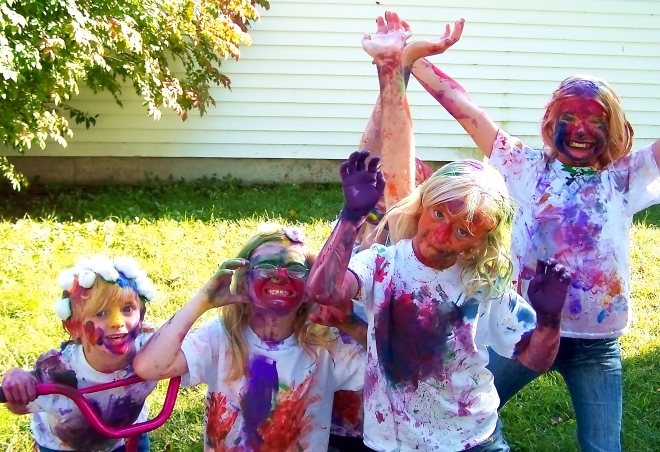 Doing pointless, purposeless things, just for fun. Doing things for the sheer devilment of it. Being silly for the sake of being silly. Larking around. Taking pleasure in activities that do not advantage us and have nothing to do with our survival. These are the highest signs of intelligence. It is when a creature, having met and surmounted all the practical needs that face him, decides to dance that we know we are in the presence of a human. It is when a creature, having successfully performed all necessary functions, starts to play the fool, just for the hell of it, that we know he is not a robot.

He recalls an vivid example from the time he and friends were looking at ancient cave art in the southeastern Sahara Desert. Amidst the usual buffaloes and gazelles, there was a series of five-dot clusters that confused them. Then a friend understood – “if he’d daubed them in paint, the fingers and thumb would have left five blobs just like the ones we had been puzzling over”:

All at once, it was clear. The bush people, lounging about after dark in their family shelter, perhaps around a fire – basically just hanging out – had been amusing themselves doing a bit of rock art. And perhaps with some leftover red paste, a few of the younger ones had had a competition to see who could jump highest and make their fingermarks highest up the overhang.

This was not even art. It called for no particular skill. It was just mucking about. And yet, for all the careful beauty of their pictures, for all the recognition of their lives from the vantage point of my life that was sparked in me by the appreciation of their artwork, it was not what was skilful that brought me closest to them. It was what was playful.