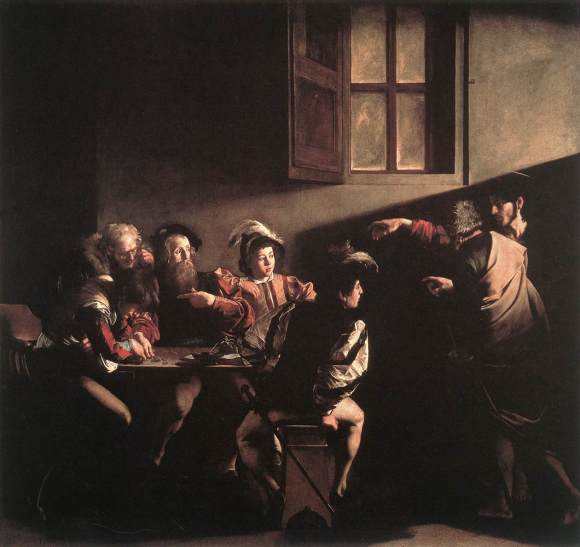 And yet, some think Matthew is the young man on the far left of the painting, the one at the table hanging his head. The gesture of the bearded man, if you look at it, is plausibly pointing to the young man with the unspoken question now being “Him?”. If the young man is Matthew the painting is capturing the moment just before Matthew lifts his head from the table to look at Jesus.

Beck goes on to write that he believes Matthew is the bearded man, but prefers the “drama” of imagining it to be the young man, about to look up and meet the eyes of Jesus. Pope Francis’s perspective on the painting, which he discussed in an interview with America in September:

“That finger of Jesus, pointing at Matthew. That’s me. I feel like him. Like Matthew.” Here the pope becomes determined, as if he had finally found the image he was looking for: “It is the gesture of Matthew that strikes me: he holds on to his money as if to say, ‘No, not me! No, this money is mine.’ Here, this is me, a sinner on whom the Lord has turned his gaze. And this is what I said when they asked me if I would accept my election as pontiff.” Then the pope whispers in Latin: “I am a sinner, but I trust in the infinite mercy and patience of our Lord Jesus Christ, and I accept in a spirit of penance.”

(Image of The Calling of St. Matthew by Caravaggio, c. 1600, via Wikimedia Commons)