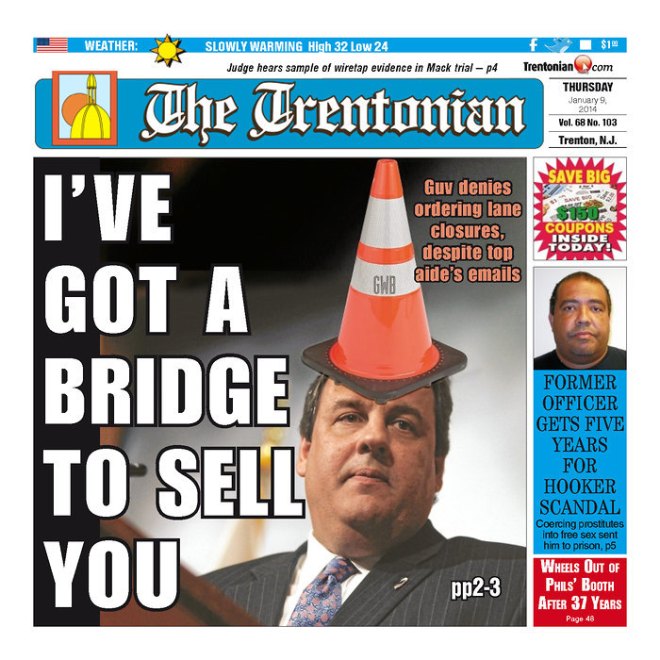 A few thoughts about Christie’s presser (which continues to go on). He’s a pro. He stood there and took the heat, kept on message, revealed an impressive grasp of detail, explained what he’s been doing these last few days, and declared himself “betrayed.” The general assertion is that he could have had no direct responsibility for creating a culture in Trenton that gave us “callous indifference” to the welfare of the citizens of New Jersey and what he called a rogue political operation run by his own deputy chief of staff. He was poised; he did not seem too rattled; he took responsibility for the blow to New Jerseyans’ confidence in the integrity of their government. He claims, moreover, that he had no idea who the mayor of Fort Lee was. He had no idea he refused to endorse him. So he had no motive to do anything nefarious. So it remains a “mystery” to him.

As long as he’s telling the truth, the whole truth and nothing but the truth, I think he did about as well as anyone in that pickle could. But … one thing truly stuck out to me. Christie fired Bridget Kelly without talking to her since the emails emerged. That does not seem to me a chief executive entirely interested in how this actually came about. If I were in his position and believed I was betrayed to the point of going out there and telling untruths, I would want a face-to-face with my deputy chief of staff to understand the full context, and get to the bottom of it. Firing her summarily without even talking to her seems a weird act of abrupt distancing. I’m not sure it’s even wise. Sure he was right to fire her. But why do so in such a way as to alienate a close staffer without giving her a chance to explain herself? What happens if she returns the distancing herself? She will likely be subpoenaed and we’ll find out.

I was also struck by Christie’s insistence that Kelly was fired because she lied to him. Not because she engaged in petty vindictive politics. But because she deceived him. He claimed that she had never deceived him previously in any way. Again, his core issue is what was done to him, not what was done to the inhabitants of Fort Lee. What he cannot explain away, it seems to me, is the tone of the emails which suggest that this kind of thing was so routine it could be talked about almost in code and another official would instantly respond “got it” to a mere suggestion of “traffic problems.” That’s not a rogue moment, it seems to me. It’s part of an obvious pattern. The vindictiveness is not a leap; it’s a premise. The idea that Christie had no responsibility for creating a culture in which that premise was unremarkable is, to my mind, deeply implausible.

But he sure has put himself out there on a very long limb.

His administration, he tells us, as he told us for months, has “nothing to hide.” He wants to be judged now for expeditiously firing the responsible people, not letting this kind of petty, vindictive abuse of power spread in the first place. He is, he insists, a total victim in all this, blindsided, shocked, surprised. And he nailed that performance.

But if I were Christie, I’d be a little worried about Bridget Kelly. He threw her under the bus without even seeing her face to face. He’d better be damn sure she has no way to implicate him as well. And, after being blindsided by one bunch of leaked emails, what happens if he’s blindsided by more?

I give him a high grade for this performance. If it contains even an ounce of inaccuracy, he’s toast. And this thing will doubtless go on. And subpoenaed emails and texts are unpredictable things.