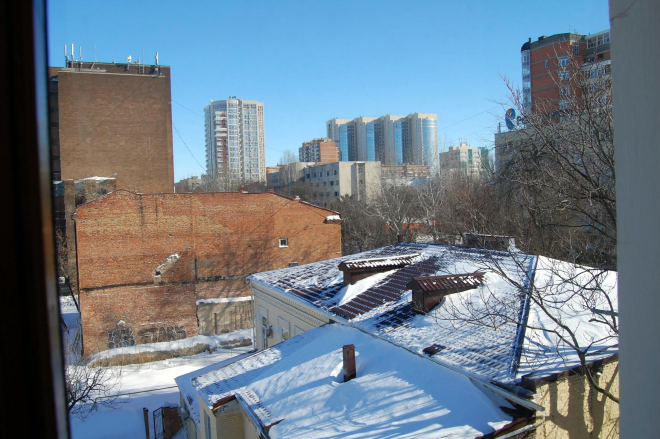 A reader describes the scene:

High-rise condos, barren trees, snow everywhere, a run-down brick building with graffiti on it. It could be any of the North Jersey bedroom communities across the Hudson from New York. I’m going with Fort Lee because it’s been in the news so much recently.

The window is themed on a recent news story, but not Bridge-gate. Another reader:

A Game of Thrones fan weighs in:

Based on the relatively low number of entries this week, this reader wasn’t alone:

Oh my lord. How can anyone win this contest?? And then you have those damn tree branches covering that sign on top of the building!

That logo at the right looks soooo familiar, but my darned middle-aged memory won’t help identify it. So let’s call this the untouristed Basel, outside the center but near the Rhine.

The Bronx, no thonx. Although I know it intimately, I have never seen that sign on the right nor that hi-rise cantilevered structure in four parts. But to a native, it’s the first thought that comes to mind – and it seems impossible that it can be anywhere else on Earth.

Obviously, the key to this one is figuring out the logo obscured by the trees off to the right. Turns out, a LOT of companies have logos with stylized “P”s (or is that a rho?). Probably North America, far enough north for snow (so not Florida) and in a city with a lot of recent-vintage construction. The crisp blandness of the highrises screams Belltown, Seattle, to me, though I cannot pin down the exact location. Most likely because I’m wrong. But after all those P logos I just can’t bring myself to slog through Google images of “boring high rise condo buildings”.

Another gets the right country:

Well, I’m making a guess that’s a 180 from my original thoughts. At first glance it looks like my neighborhood on Chicago’s north side; the snow cover is just about right but the buildings are not

familiar, and what is that logo on the building to the right? Perhaps another North American city, in Canada perhaps?

But I finally identified the logo using Google search: it’s from Rostelecom, the Russian long-distance service. It would be too predictable for it to be Sochi (it probably doesn’t have snow anyway) so I’ll go with a nice Baltic town like St Petersburg. But then where are the Soviet era buildings and why the American style grafitti? Still looks a lot like Chicago.

Another is more definitive about Russia:

Moscow. I’m not watching the Sochi Olympics but I’m sure anyone who is has seen that Cyrillic letter P everywhere. It an interpretation of an ear and belongs to Rostelecom, Russia’s leading long-distance phone company. I have scoured the web for images of the buildings in the distance in Russia with no luck.

Another nails the correct city:

For several months I’ve just given up without trying (there wouldn’t be enough to go on in a given view to justify the head banging that would accompany the futile search), but this week’s view offered a couple of clues that tempted me back in:

A quartet of distinctive glass skyscrapers together with a sign, obscured by a tree but just legible enough to indicate it was probably Cyrillic. Thus probably Russia, but probably not Sochi, because it’s not your style to be so obvious. Anyway, a quick couple of Google image searches for similar building in Russia bore fruit: about 360 miles north of Sochi in the port city of Rostov-na-Don.

I then spent a pleasant hour or so touring the locale and nailing down the quasi-exact address, which is on Pushkinskaya (maybe 173b or nextdoor), seemingly on the campus of Ростовский базовый медицинский колледж (Rostov Medical College). It’s just southwest of the public library (the brick monolith to the left in the view), across Pushkinskaya from Rostelecom (the building with the blue sign to the right), and about a block and a half northwest of the Rostov City Towers (the glass buildings in the background). Thankfully, having won once already on contest #143, I don’t feel the need to drill any deeper to get this specific window. But it was fun to be back in the game.

Another imagines an Olympics tie-in:

I am guessing the person who sent this in was a ski jumper, injured in his warm-ups for the Sochi games and airlifted to Rostov-na-Donau for treatment. Specifically: Rostovskiy Bazovyy Meditsinskiy Kolledzh. Rostov-na-Donu, Pushkinskaya ul., 173b:

I’m going to go with the fourth floor. I could not find a picture of the clinic, and it probably only has three floors.

I wanted to tell you that since winning my very own VFYW book a couple years ago (back when the competition wasn’t quite as fierce), I’ve taken to posting the weekly contest photo on my Facebook wall to let my friends have a go at it. There is a small but determined group of us who tackle the contest each week, and I announce the winner, same as you, only among a smaller pool of brilliant people. One of my friends won your contest about two months ago.

Another regular player was stumped until turning on the TV:

I ignored my family all day Saturday with little to show for it, ultimately narrowing it down to Canada, England, China, Philadelphia, Belgium, Bosnia and Herzegovina, Poland, or Austria. Maybe the Netherlands or South Korea, or Japan. The vast majority of companies I could find that ended in ‘-kom’ were in Eastern European countries. Then, watching the Olympics and considering how Sochi is spelled in Russian: Cyrillic alphabet. I found Rostelecom. Maniacal laugh: Rostov-on-Don, Russia. I’m going to guess the picture was taken from this window:

The smaller yellow building in front of it is part of a medical school, the website listing it as at 173-б (letter between A and B in the Russian alphabet). Google Maps includes the pic site as part of the college.

So after all this, Russia during the Sochi Olympics, huh?

Another hears our own maniacal laugh:

So I was expecting an easy one this week after a tough one last week. But no. You had to be especially evil and pick a view not from the obvious Sochi, but from a city just 250 miles away. The view this week comes from Rostov-on-Don, Russia, specifically the Rostov Medical College.

I identified the country fairly fast by figuring out what the sign above the building across the street said. I couldn’t read it through the trees other than P______KOM, but the logo was distinctive enough. Making a mock-up of the logo (attached), a Google image search identified it as belonging to Rostelecom, a Russian phone company. While they have offices outside of Russia, the sign was clearly written in Cyrillic, so I knew the country then.

I expected identifying the city would be easy. and I figured all I had to do was find the correct Rostelecom office building. Sochi was my first guess, but no, that wasn’t it. It wasn’t Moscow, Saint Petersburg or a dozen other major cities either. So then I had to turn to other clues in the picture.

The next big clue was the graffiti on the brick building in the foreground. It clearly says STARK, which I don’t think is Russian. It is the German word for strong though. This led me to research cities in Russia with large German populations (thanks to Wikipedia), but I still couldn’t find the right one.

Looking at a map then, I noticed Volgograd (one of the German cities) was fairly close to Sochi, so this put me on the “Andrew is being evil” track. Looking at nearby cities, I checked out Rostov-on-Don and bingo, that’s where the Rostelecom building was. Identifying other landmarks in the view was easy after that. Across the street from Rostelecom is the Medical School. All the street views are obscured by trees, but the satellite view makes it clear where the window is. The view is just south of due east and I’m guessing it’s on the 4th floor:

Another gets the exact address:

Unfortunately, Street View does not provide enough information for me to certify its exact address. It looks like the yellow brick building is #173 Pushkin St. (a medical college). But the building behind it, #171, frustratingly lacks description on Google Maps. However, a search of the Cyrillic address “171 пушкинская улица Ростов-на-дону” brings up a host of residential advertisements for this location. This website says that this building has 5 floors and 40 apartments. So, I’ll guess 3rd floor. No idea about apartment number, though.

The winner this week is the only Correct Guesser (of a previous difficult contest) to guess the right floor:

Cold in the winter (snow), hot in the summer (window air conditioners).  The P sign didn’t look like the Latin alphabet, and guessing it could be Cyrillic in a nod to the Olympic Games in Russia, I Googled and found a list of companies in Russia on Wikipedia, which led to Rostelecom.  Googling Rostelecom’s regional branch office locations, I picked the southeast one in Rostov, which is close-ish to Sochi (a guess, as a nod to the Olympics, but also the southeast area would be a place with cold winters and hot summers).

The Google Map for Rostelecom in Rostov led me to the right place, confirmed the tall building and group of four in the background, but the limited Street View and abundance of trees made it difficult to narrow down the correct window where the photo was taken.  The little dormer windows on the roof next door leads me to guess 171 Pushkinskaya St, Rosotov, Russia.  Northeast side of the building.

Which floor?  Well, the Rostelecom building is 7 stories high, and the view is not as high up as that (the view doesn’t rise over tree height and the building isn’t seen over the treetops in Google Street View), but it’s higher than the 2+ story building next door with the dormers.  The gray building directly ahead has 6 floors, and the view looks to be at eye level with the fourth floor.  I’m going to guess 4th floor, third window back.

Oh wait! I just found a photo on Panoramio of the building next door, showing a sliver of the likely window.  The building has shorter stories, so I’d like to amend my guess to a window on the 5th (top) floor.  I also think it could be the first window back from the street.

From the photo submitter: