A reader throws up her hands:

A tennis court, a small island, an airplane, and a palm tree. Is that all there is to go on, or an I missing something obvious?? If I check in on Tuesday morning and I read, “500 people correctly guessed this weeks window,” I swear I will hang up my hat! (Just kidding… I enjoy this too much).

I will take a wild guess and say some small place in the Indian Ocean. Room 813.

That looks very much like one of the many lagoons that dot the sea shore along San Diego County, CA. I’m going to say this is looking across the Laguna Hedionda from the Snug Harbor Marina in Carlsbad.

Another uses the process of elimination:

Sure as hell not Albany, NY … but I wish it were!

Another gets much closer:

The geography doesn’t ring a bell, but I’m sure I’ve seen those clouds before – somewhere in Hawaii?

Elsewhere in the Pacific:

This week is a real tough one. For some reason the fauna and the architecture has me betting on a small city in Muslim SE Asia. After accounting for the presence of the river, the mountains, and the medium level of development, I’m going to guess Bandar Seri Begawan.  I know I’m not right (I can’t find any tennis courts anywhere near downtown) but I really want it to be because Brunei is just crazy enough for this contest. This one stumped me. Congrats.

One of the handful of correct guesses this week:

The U.S. hint you provided was very helpful.

Not so much for telling me that it was the U.S. – which was my immediate guess from looking at the photo – but for suggesting that it was probably a place that doesn’t immediately spring to mind as being part of the U.S. After searching the coastlines of Puerto Rico and St. Thomas, and ruling out St. John for not having an airport, I went to look for an inlet with a green-covered rock island and a tennis court that abuts the water. Thanks to Google Maps, I found both of those things at the Alupang Cove Condominium on the cliff of Satpon Point in Hagatna Bay, Tamunging, Guam and the neighboring Sheraton Laguna Guam Resort.

It looks to me like the photo was actually taken from the Sheraton, from one of the lower level rooms. The area in question can be seen in the upper right of this photo, where the Sheraton is the terraced-shaped building in that corner. I’d guess the photo was taken from one of the lowest-level of guest room, just above the cement roof pictured in the photo. For the sake of the ridiculous precision that’s usually needed, let’s say the third room from the end.

Excited to get one that isn’t from my home town and in a place I’ve never visited!

Thanks for the hint, otherwise not sure I would have been able to figure this one out. Clearly it was a tropical location, and with the clue that it was in the US, that immediately made me think of Guam. What looks like an airport tower in the picture and plane quickly oriented me to look for water side locations that would have a view of an airport (in this case I believe the Antonio Won Pat Int’l Airport). Also, it was clearly in a developed area of Guam.

The picture was taken from the Sheraton Laguna Resort in Tamuning, Guam with a view across the Agana Bay. I have limited time and have not been able to find any good pictures showing this exact view, but am pretty sure about my guess. I will guess the photo was taken from the sixth floor.

A local chimes in:

Nice touch with the “In the United States” quote, as not many Americans actually realize that.  I know this place well because I kinda live down the beach from it.  The building seen on the right is Alupang Beach Condos.  This picture must have been taken from the Guam Sheraton Hotel. This is my first time even trying for one of these, but this week I’ve never been so sure of an answer. Thanks for featuring my beautiful island.

Another local describes the scene in detail:

I used to live up on the bluff on the far side of the picture, in Maite, right behind what’s known as the Calvo compound, where the current governor and members of his extended family live. That’s Alupang Island in the foreground, in Hagatna Bay. The taller white building across the bay is Alupang Tower, and the 10-story building looking tiny off to the right, in downtown Hagatna, is the DNA Building, where I used to work. The medium-sized building in the middle background with the green roof is First Hawaiian Bank’s Maite branch. The plane is landing at Won Pat Airport, probably from Japan.

I hope all this detail gets me somewhere, because I can’t do all that expert triangulating to tell you exactly what window this was taken from. Presumably a window at the Sheraton, since those look like the Sheraton tennis courts. If only you hadn’t dropped the “It’s in the U.S.” hint, I might have had a chance. At any rate, thanks for the trip down memory lane.

Another almost gets the window:

The hint made this too easy.  Palm trees, clearly volcanic mountains, buildings that look in need of refurbishment, but it is “in the United States”. I first thought of Puerto Rico, then maybe Hawaii.  Third guess was Guam.  A quick Google Earth lap around Guam, and the distinctive island in the photo popped up, with clearly visible tennis courts. The fact that there is a visible airplane on final to runway 6 at Antonio B. Won Pat International Airport is even better!

The photo is taken from one of the lower floors of a south facing room in the Sheraton Laguna Guam Resort Hotel:

Here is a shot of the hotel from a distance, looking almost exactly in the opposite direction, with the approximate location of the room circled:

Here is another photo showing the roofline, with my guess at the room circled:

Clues? Humbug! Happily, I didn’t see the extra help until after I’d located the view and was back reading the regular Dish posts. This week’s view comes from the Sheraton Laguna Hotel in Tamuning, Guam. The picture was taken from the 1st guest floor of the hotel and looks south by southwest along a heading of 197.45 degrees. (A truly rough guess for time and date would be around 8:26 on the morning of March 26th.)

Two weeks ago for VFYW #196, Bonn, I wrote about how the capture of the nearby Remagen bridge portended the end of the war in Europe. Curiously, this week we’re near a site that holds similar significance in the Pacific theater. Just north of Guam lies another island in the Marianas, the island of Tinian. Today it’s sparsely populated, but in 1945 Tinian was home to a massive air field from which the US launched B-29 raids on Japan. And it was from that same field that Paul Tibbets and his crew flew the Enola Gay to attack Hiroshima on the morning of August 6, 1945. Japan, of course, surrendered nine days later. Here’s a satellite shot of Tinian’s overgrown North Field, with insets showing the Enola Gay on the runway and “Little Boy” in its loading pit:

But only one reader got the correct room:

Two clues pointed to Guam or similar islands in this part of the Pacific. The landscaping and layout of the grounds are very reminiscent of Hawaii resort designs and plantings from the 1980s and 1990s. The raised limestone islet eliminated Hawaii and other volcanic islands. Guam was the next choice, as it is partially formed of limestone and has resorts influenced by Hawaii developments if not planned by the same firms. Multiple triangulations from the islet and buildings across the bay all pointed to the area near or at the bend along the building’s southern side.

The window location guess relies on a change in the angle of exposed concrete beams on the lower roof which is visible in the aerial image of the building and immediately below the lanai railing in the photograph. Not a clue on room number, but I think it’s this room: 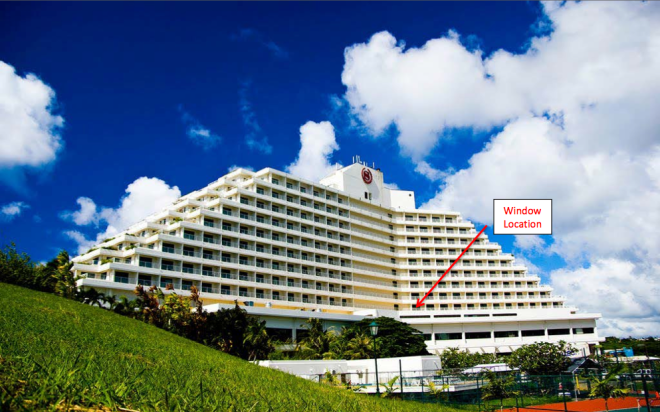 As you can see from the image provided by the submitter below, that reader nailed it:

I’m delighted to see that you used my picture for this week’s VFYW contest! I said Hagatna, Guam in my submission email because that’s what the view is looking at. But now that it “matters,” here’s a bit more information. I took the photograph from room 302 of the Sheraton Laguna Guam Resort in Tamuning, Guam. (Third floor – there’s an elevation drop from the front of the hotel to the back, which is why it looks higher than that in the picture.) That little island in the middle of the picture is one of many popular snorkeling spots, and the hotel gives you a kayak to get over there.

My grandfather piloted a B-29 in WWII from Guam’s North Field (now Andersen AFB), and I’d always wanted to see this sliver of my family history. He’s second from the right in this picture: 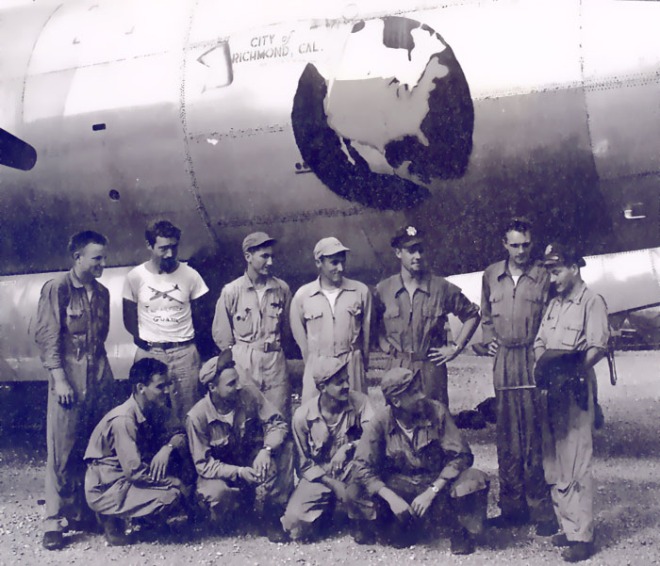 After driving around the island for a couple of days, one thing I left with was an appreciation for how beautiful and varied Guam is. This isn’t exactly an original opinion – Tumon, the island’s center of tourism, is a popular destination for Asian beachgoers. And apparently, one Cartier boutique isn’t enough to satisfy the demand – in a one-mile stretch there are two of them, along with two Louis Vuittons …

I’m guessing that this will be a tough contest!

So tough there were only 18 entries. We’ll try to make next week’s view a little easier …