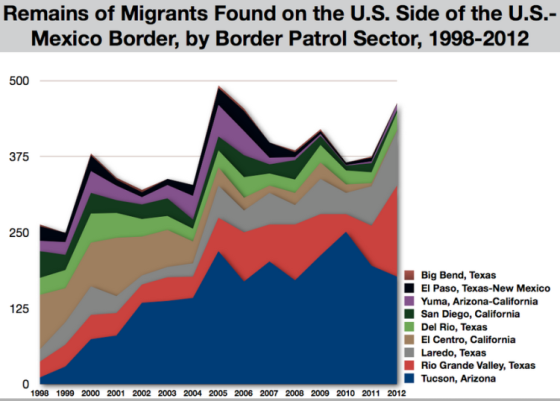 Deaths near the US-Mexico border are on the rise:

The graph [above], from the Washington Office on Latin America (WOLA), shows that fatalities nearly doubled between 1998 and 2012. The only year with more deaths than 2012 was 2005. WOLA researchers Adam Isacson and Maureen Meyer explained in April 2013: “In that year, Border Patrol captured more than three times as many migrants as it did in 2012. The migrant population was far larger, but the number of deaths was similar. A much larger fraction of the migrant population is dying today.” The most recent data from the U.S. Border Patrol puts fatalities in 2013 slightly below the 2012 figure—445 deaths compared to the previous year’s 477—but that still puts 2013 ahead of every other year but 2005 and 2006.