In the Brendan Eich affair, it seems to me, there are, beneath the fury and the name-calling, two core narratives in conflict, and they are driven by two different approaches to politics. For the sake of argument, let’s call one a progressive vision and the other a liberal one. Here’s Jon Lovett making a fundamentally liberal point:

The trouble, I think, is when ostracizing a viewpoint as “beyond the pale” becomes not an end but a means to an end; that by declaring something unsayable, we make it so. It makes me uncomfortable, even as I see the value of it. I for one would love homophobia to fully make it on that list [of impermissible opinions], to get to the point where being against gay marriage is as vulgar and shameful as being against interracial marriage. But it isn’t. Maybe it will be. But it isn’t. And kicking a reality-show star off his reality show doesn’t make that less true. Win the argument; don’t declare the argument too offensive to be won. And that’s true whether it’s GLAAD making demands of A&E or the head of the Republican National Committee making demands of MSNBC.

Then there is another approach, in which creating a progressive culture in which some things are unsayable is the whole point of the exercise. Here’s a piece by J. Brian Lowder with that perspective. Money quote:

Tim Teeman wrote on Friday that “the ‘shame’ axis around homosexuality has positively shifted from those who are gay to those who are anti-gay.” He may be right about that, but speaking personally, I am not interested in shaming anyone; it would be enough for me if those people who are so ignorant or intransigent as to still be anti-gay in 2014 would simply shut up.

This is not a minor disagreement. It’s a profound one. One side wants to continue engaging the debate. The other wants one side to shut up. I think you also see this difference in the responses to Jon Chait’s new piece on race in the age of Obama. Progressives see the scale of the historically-loaded injustice that African-Americans face every day and cavil at any attempts to minimize or qualify the iniquity of those on the right who still deploy its rhetorical codes. Liberals still insist on some fairness, on not jumping to conclusions about an entire party’s or a single person’s racism, on seeing that human beings are not so simple as to be reduced to such ideas as “hate”, on maintaining some kind of civil discourse which right and left can engage in, which eschews too-easy charges of bigotry. 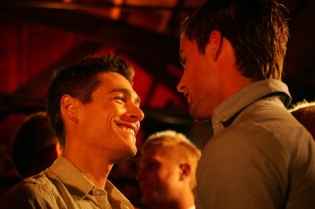 One seeks to get to a place where a conversation ends. The other seeks never to end the conversation, and, in fact, gets a little queasy when any topic is ruled out of bounds in a free society.

Maybe if we can appreciate both traditions, we can see the underlying forces behind this debate more clearly. My own instincts on the gay rights question have always been classically liberal/small-c conservative/libertarian. I think hate is an eternal part of the human condition, and that ridding oneself of it is a personal, moral duty not a collective, political imperative. I never want to live in a society in which homophobes feel obliged to shut up. I believe their freedom is indivisible from ours. Their hate only says something about them, not me. I oppose hate crime laws for those reasons. And my attachment to open debate means constantly allowing even the foulest sentiments to be expressed – the better to confront them, expose them and also truly persuade people of the wrongness of their views – rather than pressuring them into submission or silence. Others have a different vision: that such bigotry needs extra punishment by the state (hence hate-crime laws), that bigots need to be constantly shamed, and that because of the profound evil of such thoughts, social pressure should be brought to bear to silence them. More to the point, past sins have to be recanted and repented before such bigots are allowed back into the conversation.

This is a very old fault-line in civil rights movements, and it’s amazing that the gay rights movement has been able to keep these divisions at bay as we fight for basic equality. That may now begin to change, if only because an entire generation has now grown up having deeply internalized their self-worth, and are thereby rightly all the more affronted by those still resistant to it. I understand that entirely, and am glad for this shift in consciousness – especially since I spent much of my adult life trying to bring it about. It’s wonderful for me to read young gay writers insist on their non-negotiable and full equality in terms of marriage – if only because I tried to make that case decades ago to a great deal of bewilderment and dismissal from many. This is indeed great news, as Frank Bruni noted. And, when couched in positive, constructive terms, it has won more converts among more straight people than most of us ever dreamed of.

But liberalism, for me, is not a means to a progressive end. It is an end in itself.

It seeks to guard against groupthink and social pressure as dangerous threats to freedom of thought and of the individual. It aims to protect the rights of bigots as well as the targets of their bigotry. At any one point, that can seem grotesquely unfair. And it is. It is and was deeply unfair that, in order to enjoy some simple basic rights, we gays have had to explain ourselves to the world, listen to our very lives being debated as if we were not in the room, have our lives and loves traduced and distorted and picked over by people who treat us as pawns in a political game or an intellectual exercise. But, you know what? We had no choice if we were to move forward. And, boy, have we moved forward through this difficult process.

I’m not taking this position because – to count some of the milder terms thrown in my direction in the last few days – I have internalized homophobia, I want to leverage others’ suffering for web traffic, I have never done anything to advance gay equality, I am a hypocrite/privileged white male/barebacker/Uncle Tom, and on and on. I’m taking this position because it is my honestly thought-out view. It’s laid out in Virtually Normal, which is emphatically not a progressive book. And it’s because I am also convinced that a liberal approach to politics will lead to – and has led to – more actual justice and a deeper changing of minds.

We have not won the debate this past decade or so because we have constantly exposed others’ hatred, or racked up the number of people we can condemn as homophobes. We have won because we have made the positive and reasoned case for our equal dignity and rights. We have won because we have engaged, not ostracized. And we have won more definitively because of it. How much better to have allowed this free debate to continue and to have actually genuinely changed people’s hearts and minds than to have tried to impose a settlement on the unwilling and unpersuaded, and then demanded they shut up. And this is what I would try to say to my progressive gay friends: if you really want the full justice you rightly believe in, stop trying to close down a debate which we are winning and in which we still have many people to persuade. Of course there’s bigotry and ignorance out there. But calling everyone who disagrees with you a bigot rules out a chance to persuade them, drives them further into a defensive crouch, and prevents us winning the argument in the long run.

If the liberal approach had so demonstratively failed, it would be one thing. But, in this case, it has demonstratively succeeded – perhaps more than any recent social movement. We shouldn’t forget how we got here. Or believe that somehow suddenly different tactics cannot still take this debate in a different direction. They can; and if we are not careful, they will.