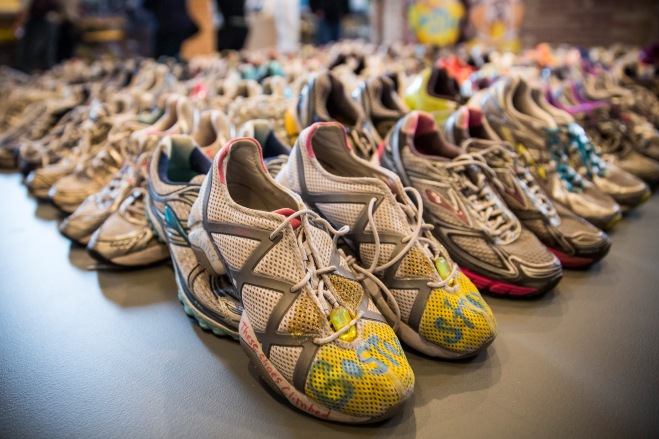 Ian Crouch visited a memorial to the Boston marathon bombing, which occurred a year ago today:

Last week, to mark the anniversary of the attacks, the Boston Public Library opened an exhibition called “Dear Boston: Messages from the Marathon Memorial” at its main branch, in Copley Square. The centerpiece is a collection of more than a hundred pairs of running shoes that had been left at the makeshift memorial. One pair has the word “Boston” on the left toe and “Strong” on the right. Another has a baseball set in each heel. Another features a tag with the number 26.2, the standard distance, in miles, of a marathon. The rest are just plain running shoes—an array of brands in a rainbow of colors, the kinds you see shuffling along the ground on a normal race day. Once shiny and gleaming, they are now dulled and frayed by use, and by the days they spent out in the weather last year.

Other items are a reminder of the simple, handcrafted objects that distinguished the memorial’s impromptu inspiration. The four white crosses are set in a row. Behind glass, scraps of paper communicate outrage and despair. There are signs with quotations from figures ranging from Martin Luther King, Jr., to Jerry Garcia (“Don’t tell me this town ain’t got no heart”). Notes and cards and posters from far-flung places: Istanbul, Morocco, the Philippines. Certain phrases recur, in pencil or pen or marker: “No more hurting people.” “Peace.” “Hope.” “We will finish the race.”

Eric Larson profiles Rebekah Gregory, whose leg was severely injured in the blast. She has undergone 16 surgeries and is now considering amputating the leg:

In the appointment room today, Dr. William McGarvey, Rebekah’s orthopedic surgeon, looks away from the window and asks her to stand. Reluctantly, slowly, she does. Tears spring to the corners of her eyes; her body begins to shake. The skin on her leg, between the scars and stitches, turns purple. She sits back down.

Resting, standing and sleeping — it doesn’t matter, she says. Everything hurts, “like an 11 on a scale of one to 10.”

She’s been taking pain medications regularly — Tylenol 3, Cymbalta and Celebrex — but admits they’ve only been temporary solutions. Minor distractions, at best, from the seemingly endless pain.

The main problem is Rebekah’s foot is drifting inward. The bomb destroyed tissues and bones, and because of where they’re missing, the tendons have nowhere to attach. As a result, they’re pulling from the inside of her ankle.

There’s still shrapnel from the bomb inside her leg. Sometimes, she says, a small piece of metal or BB will lodge out of her calf while she’s sleeping.

(Photo: Runner’s shoes are laid out in a display titled, ‘Dear Boston: Messages from the Marathon Memorial’ in the Boston Public Library to commemorate the 2013 Boston Maraton bombing. Last year, two pressure cooker bombs killed three and injured an estimated 264 others during the Boston marathon, on April 15, 2013. By Andrew Burton/Getty Images)