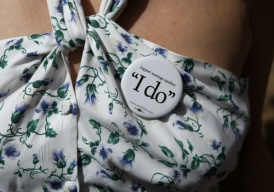 Prop 8 campaign six years ago is the racial analogy. After all, isn’t opposition to marriage equality morally identical to opposition to inter-racial marriage? If so, why not punish and ostracize and get someone fired for opposing marriage equality as you would in a miscegenation case? I grappled with this at the time but Jon Rauch has a helpful piece explaining our position a little better.

Basically: gendered marriage had long been a settled assumption about the nature of what marriage is when we came along with the argument for same-sex marriage. Inter-racial marriage had existed as gendered marriage for a long time in some parts of the country, alongside anti-miscegenation laws in others. We were therefore asking for a bigger change than in the past – and one that had far less traction and history behind it. When you’re asking for more, a little more patience is necessary – and a little more lee-way for opponents is appropriate. We’re talking prudence here.

Yes, the opposition to inter-racial marriage had religious roots and rationalizations.

But the theological underpinnings of marriage as a gendered institution – between one man and one woman – were far deeper and wider than any theological roots for opposing miscegenation. And since the religious conscience carries weight in America, a full-scale assault on that ancient tradition as nothing but bigotry would have repelled far more people than it would have attracted. And that’s still the case. Calling every religious opponent of civil marriage equality a bigot would hurt our cause not help it. It alienates the very people we need to persuade.

Lastly, if reason and debate and testimony and civility had met total failure and unyielding majority opposition, I can see the case for more radicalism. But these tactics actually led to as swift a shift in public opinion on a major social issue as we’ve seen in American history. It’s therefore prudent, it seems to me, to sustain the same civility to get us to the ultimate prize of equality across the nation and world. And the posture of shutting people up, of declaring their consciences objectively null and void, and punishing dissent – even as it is fast disappearing – is an unnecessary and self-defeating posture.