It’s not just a problem with the GOP. It’s an increasingly knotty problem for the British Tories, now trying to manage the rise and rise of the anti-immigrant United Kingdom Independence Party (a rough version of the US Tea Party). Alex Massie notes:

As I pointed out yesterday, the Tory share of the BME [Black and Minority Ethnic] vote in 2010 was exactly the same as their share of the vote in Scotland: 16%. True, this was an improvement on 2005 when only 11% of BME voters endorsed Conservative candidates but that’s a matter of only modest solace for Tory modernisers … Immigration is what you might term a Gateway Issue. You need to get past it before you can speak about other issues of more immediate concern to voters’ actual lives. You need to earn the right to be listened to. You need license to be heard. You need standing.

The discomfort of British Conservatives with immigration is not as easily conflated with racism as in the US. UKIP’s focus is as much on European immigrants (4,000 a week – exercizing their right to work and live where they choose in the EU) as on South Asian or Middle Eastern immigrants. And it speaks to something that I think is sometimes crudely over-looked in this debate. Conservatives in general are 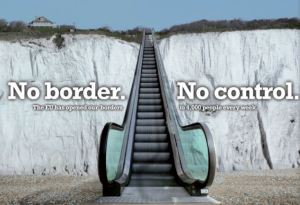 more attached to the status quo than liberals, more suspicious of radical change, especially when it seems to be an ideological imposition by empowered elites. And so to live in a small town which has been ethnically and culturally very English for centuries and then to see in a matter of years a sudden and palpable Polish immigrant population that instantly changes the entire cultural dynamic will inevitably lead to bewilderment, anger, loss. It’s also true that Britain, in comparison with the US, is a tiny island, with limited resources and land. Remember also that European immigrants will almost immediately be eligible for treatment in the National Health Service and many other state benefits, and you can see why this is an issue.

And so conservatives are in a bind. They would like, in some ways, to reverse history – to never have had the 1986 amnesty in the US, or to have never agreed to enter the EU. But both those changes are effectively irreversible without incurring further massive subsequent changes which would disturb the status quo even more profoundly. And conservatives have a hard time making their legitimate case for cultural stability without seeming like bigots. It’s the same thorny problem with marriage equality: a discomfort with change but an inability to offer a viable, workable alternative, which leads to an understandable assumption that all opposition to gay marriage is mere rancid KKK-style hate.

And this is an eternal conservative problem.

Conservatism at its best is an imaginative attempt to balance stability and change in a manner which makes a society more coherent, more itself. When change happens swiftly, that balance is all the more necessary but also more difficult. At some point, mass immigration or a multi-cultural society or a gay-integrated world becomes the status quo to which conservatives will become attached. But in the meantime, they are pinioned emotionally between past and future and have not found leaders in either the US or the UK that have risen to the occasion of bridging the two. Fear and anger have thereby increasingly defined the new conservative center. And it’s currently a lose-lose proposition.

In part because I’m an immigrant and gay and live in a historically black city which is increasingly integrated, my own conservatism is of the much more moderate kind. Perhaps because I am not so threatened by racial and cultural change, I saw Obama as a quintessentially small-c conservative, a living blend of black and white, a realist abroad, a pragmatist at home, an integrator rather than a polarizer. I was an outlier, we now know. But at some point, that more moderate conservatism – one that actively celebrates a multi-cultural society as a traditional American value – will win. The question is simply how tortuous the path to that future will be. Which is why we are searching the landscape for a future Republican leader who gets this (and keep bumping into versions of Ted Cruz) and searching for a British Conservative who can do the same (and sussing out Boris).

(Illustrations: two posters for UKIP in the European elections on May 22.)