As the first Dish book club draws to a close, the author of How Jesus Became God was gracious enough to answer your questions about his book. Below is the first installment of his responses:

Has changing your mind about a major question, like when Christians believed Jesus to be divine, caused you to rethink any of your other positions about the historical Jesus or early Christianity?

My views of the historical Jesus have not changed at all. Ever since graduate school I have thought that Albert Schweitzer was basically right (though wrong in the details) in understanding Jesus as a Jewish apocalyptic prophet who anticipated that God was soon going to intervene in history in order to overthrow the forces of evil and bring in a good 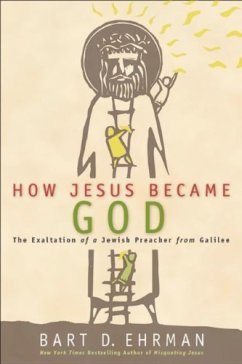 kingdom on earth. That continues to be the most widely held view among critical scholars in Europe and North America. Understanding that Jesus was this kind of teacher/preacher is important for my book, since Jesus almost certainly did not teach his disciples that he was God, but that God’s kingdom was soon to arrive and they needed to prepare for it.

Where my views have changed involves the key question of what Jesus’ followers thought about him after his death. The view I held for many years was that the earliest Christians did not think of Jesus as truly God until late in the first century, when the Gospel of John portrays him as declaring himself to be divine. In doing my research for How Jesus Became God, I became convinced that this was absolutely wrong. The followers of Jesus declared that Jesus was God as soon as they came to believe that he had been raised from the dead. Already at that point they maintained that God had made him a divine being. And that was the beginning of Christology.

You firmly put Jesus in his context as first century Jewish apocalyptic preacher, but are there any ways in which he was different from the other would-be messiahs most of us have never heard of?

Yes indeed! Jesus was certainly different from other ones, for no other reason than that all of us is different from everyone else. So he must, virtually by definition, have been different. His

overarching message was not radically different from the one proclaimed by others (e.g., John the Baptist). But what made him especially different in my judgment is two things. First, he taught that he would be the king of the kingdom that was soon to come (John the Baptist never said any such thing about himself) and that those who followed his specific teachings would be the ones who would enter that kingdom. And second, unlike every other alleged messiah from antiquity, Jesus alone was thought by his disciples to have been raised from the dead. That changed everything, as I try to show in my book.

If the Gospels are as unreliable and contradictory as you make them out to be, why trust any parts of them for information about the historical Jesus?

In many respects the Gospels are like any other historical source for any historical event or person – whether a source from the 50s or the 1950s. Every source has problems, and historians when using sources have to determine what those problems are and how to get around them in order to use the sources to establish what most probably happened in the past. So I don’t believe in having any different approach to the Gospels from that which you would have to any other ancient source – for example, Plutarch, or Suetonius, or Philostratus, or … choose your author!

Scholars have methods for dealing with sources that are contradictory and filled with non-historical information. They are pretty much the methods you yourself use when trying to figure out what really happened when several people tell you different things and sometimes tell you versions of what happened that are obviously biased. You look for elements of their accounts that are consistent with each other (especially if they haven’t conferred to get their stories straight) and that do not reflect the biases they have and that are plausible given everything else you know about the events (general plausibility). That, in rough form, is what historians do when dealing with the Gospels. I should stress that the problem with the Gospels isn’t simply a problem that I have, and these methods for approaching the Gospels are not ones I came up with. All of this is standard material for anyone working in the field of New Testament studies.

Why does the Gospel writer refer to ‘the beloved disciple’ without mentioning his name? Is there a deeper meaning?

That’s been a very long-standing question. Some interpreters have argued that the Beloved Disciple of the Fourth Gospel is someone that we know of otherwise – e.g., John the son of Zebedee, or Lazarus, or Mary Magdalene, and so on. None of these identifications is overly persuasive. It is sometimes thought that he is a symbolic figure who is meant to stand over-against Peter in the Gospel (with whom he is often teamed). Others have thought that he is the source of the author’s information for the Gospel, a disciple known to the community in which the Gospel was written who knew Jesus and was the guarantor of the information found in the Gospel, who did not need to be named because he was well known and was simply called, by his own followers, “the one whom Jesus loved.” I’m not convinced by any of the proposals myself, but don’t have a better one to suggest.

Would it be worthwhile to compose a spare, modern “gospel,” focusing squarely on the historical Jesus, including only the best-attested material, and eliminating some of the more dubious content from the later synoptics?

Yes, that has been tried a number of times – most notably by Thomas Jefferson in the Jefferson Bible (still widely available) and, possibly less notably, and in a different way, by the modern-day Jesus seminar in its book The Five Gospels, which indicates the passages that, in the opinion of the scholars in the seminar, are more likely to be historically authentic.

Could some of the difficulties Islam is having right now be mitigated by textual criticism of Islamic scripture similar to the kind that you engage in?

I wish I knew the answer to that one! But I’m not an expert in Islam, I’m afraid.

What did you think of Reza Aslan’s Zealot, another book on the historical Jesus that’s been in the news?

Aslan is a professor of creative writing, and as a result, and as you would respect, he writes extremely well. Zealot is a real pleasure to read. Unfortunately, Aslan is not trained at the advanced level in the New Testament, classics, ancient history, the history of early Christianity, or any other field of relevance for discussing, authoritatively, the life and teachings of Jesus. And I’m afraid that this shows rather glaringly in his book, as he makes many, many mistakes both about historical detail (e.g, involving Roman history or the history of the early followers of Jesus) and about the Gospels of the New Testament and about Jesus himself. I give lots of examples on my blog in a series of posts that I gave in December (see one example here). The other thing to say is that his overarching thesis is not new, even though he more or less intimates it is. The first scholar of the Enlightenment to write about the historical Jesus (H. Reimarus) had a very similar thesis. I.e., it’s been around since the end of the 18th century and the vast majority of scholars have found in unconvincing, for reasons I lay out, again, at length in my blog.

The second part of his responses will be posted soon. Read the entire Book Club discussion on Ehrman’s book here.