Again, on my week off, Larry Kramer sounded off about the breakthrough in HIV prevention made possible by Truvada, the one-pill-a-day drug that reduces your risk of contracting HIV by 99 percent:

Anybody who voluntarily takes an antiviral every day has got to have rocks in their heads. There’s something to me cowardly about taking Truvada instead of using a condom. You’re taking a drug that is poison to you, and it has lessened your energy to fight, to get involved, to do anything.

What on earth is he saying? Flash back to the early-1980s, in the age of The Normal Heart, which just got its HBO premiere (and brought back some of the real terror and horror of the plague years). Imagine a scene when someone rushes into a GMHC meeting and declares that there’s now a pill that will make you immune to HIV if you take it once a day. Would Larry seriously have said that anyone who then took it 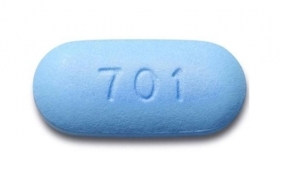 had “rocks in their heads”? I think of how it might have saved me. I was using condoms after all, and following the rules of safe sex. But I screwed up somewhere along the way, and Truvada would have been a safety net. Why would anyone not want to add that layer of security?

Larry claims that taking Truvada “has lessened your energy to fight, to get involved, to do anything.” If by that, he means some side-effects, then the obvious counterpoint is that if you get infected, the side-effects from the full cocktail are much worse than Truvada once a day. And I don’t see why being free of the terror of HIV infection somehow lessens the ability to get involved in the world. Many of us who survived thanks to the drugs went on to pursue gay equality with more energy, more fervor and more commitment than ever. I do not believe the marriage equality fight would have triumphed had it not been for the drive of so many AIDS survivors and our absolute commitment that our brothers would never be treated that way again.

Then this: It’s cowardly to take a pill rather than wear a condom? Is Larry saying we should go out in the world with fewer protections against HIV because there is more courage in more risk?

It seems to me simply prudent to have as many weapons in our arsenal against HIV as possible. That means condoms and Truvada. And, as condoms have fallen into disuse, Truvada may be by far the most secure option, as a realistic piece in the NYT simply notes:

Doctors and policy makers need to admit that 30 years of the ABC mantra — abstain, be faithful, use condoms — has failed. Men generally hate condoms, their lovers usually give in, almost no one abstains, precious few stay faithful … Unwanted pregnancies and syphilis are also prevented by condoms, which have been around for centuries. But they did not decline significantly until three mid-20th-century events: the Pill, legalized abortion and penicillin.

Notice this is about men – not gay men or straight men, but men. You need not ascribe any gay pathology to the reluctance to wear a condom when the consequence is much less dire than it once was. You simply have to be a dude with a dick.

Then there’s Larry’s perhaps understandable failure to see the true promise of what is before us.

Right now, we know that the anti-retroviral drugs make it basically impossible for a person with undetectable viral load to infect someone else with HIV. And we know that Truvada, taken correctly, reduces the risk of getting infected by 99 percent. Put those two together and you have a real chance of ending the epidemic in our lifetime. Yes: ending it. My view is that you have got to have rocks in your head if you do not want to try and see if we can do that.

Then the pessimism, bordering on absurdity:

Considering how many of us there are, how much disposable income we have, how much brain power we have, we have achieved very little. We have no power in Washington, or anywhere else, and I say it over and over again, and it’s as if it falls on deaf ears. It doesn’t occur to people how to turn that around.

Seriously? We now have openly gay military service. We have marriage equality in nineteen states and many countries all around the world. We may well have it nationally in as little as a year. We have landmark legal cases that are felling gay marriage bans across the country in an unprecedented wave. We have majority support in the country for marriage equality. We have treatments that reduce HIV to undetectable levels in the blood, and a drug to protect you from HIV indefinitely. We have an openly gay NFL player. We have a gay presence now in a whole slew of sports and across popular culture in such a way that the younger generation favors marriage equality by 78 percent in the latest Gallup poll. All of this was unimaginable in the dark years of the plague. And if the dead could return, they would, I hope, be amazed. AIDS did not finish us. It spurred us to an extraordinary social revolution, in which Larry played an important part.

Fight back. Fight AIDS. Back Truvada.