As the dust settles a little, a few scholars are fine-tuning their critiques and analysis. Marty Lederman echoes the alarm sounded in Slate about the radical view of Justice Alito (but not Anthony Kennedy and thereby the majority) that the RFRA undid decades of previous jurisprudence on religious liberty:

Perhaps we should not be too surprised by this dramatic doctrinal development in Hobby Lobby.  In retrospect, it was a serious mistake for Congress to use the language of strict scrutiny (especially “least restrictive means”) in a statute that was intended only 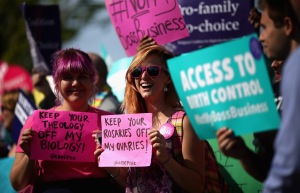 to restore a generation of Court precedents that applied a form of scrutiny that was far less searching. Chip Lupu sounded the alarm about this, not only in his testimony to Congress during RFRA’s consideration, but also in his excellent 1995 article on RFRA.

Chip was prescient:  He foresaw (see pp. 193-198) that the statutory language was a loaded gun that might one day be employed by judges inclined to press religious exemption claims far beyond what the Court had sanctioned in the pre-Smith generation:  “[T]he government will be very hard-pressed to prevail if the provision is construed straightforwardly,” he wrote two decades ago.  “RFRA, literally construed, would . . . insulate religious exercise far beyond its most stringent protection in the prior law.  If government is truly required to employ the means least restrictive of religion, without regard to the loss to the state in attaining its objectives, the Act would significantly ‘over-restore’ religious liberty in two distinct ways.  It would exceed all prior law protection, and it would frequently be insensible.”

And if one more seat goes to an Alito-style Justice, it will. In another post, Marty wonders if the Supreme Court’s temporary injunction allowing Wheaton College to refuse to fill out the form opting out of the ACA’s contraceptive mandate misunderstands the law:

The principal problem with the Wheaton College order is the Court’s assumption that changing the form of Wheaton’s objection will have no legal effect on the ability of the government to ensure that Wheaton’s employees and students obtain cost-free contraception coverage.  That assumption appears to be based upon a misunderstanding of what the parties have represented to the Court. It is true, as the Court writes, that Wheaton College “has already notified the Government— without using EBSA Form 700—that it meets the requirements for exemption from the contraceptive coverage requirement on religious grounds.” …

Yet the matter is not quite as simple as that.  To be sure, the legal obligation for Blue Cross to reimburse Wheaton students and employees for contraceptive services, without any payment from or involvement by Wheaton, arises from the underlying law and regulations promulgated by the federal government, rather than from the filing of Form 700, or from any choice made by Wheaton College.  That is the government’s principal argument, and it is at the heart of Justice Sotomayor’s dissent.

Dahlia Lithwick and Sonja West argue that the Wheaton injunction blows up the claim that Hobby Lobby was a narrow ruling, and accuse the court of contradicting itself:

Although the [Hobby Lobby] opinion nowhere guaranteed that this compromise was not also going to prove to be a religious burden, Alito said it “achieves all of the government’s aims while providing greater respect for religious liberty.” Again, you would be forgiven for reading that to mean, as we briefly did, that the form implicitly did not burden religious liberty, even though the court did not directly decide the question. Or for expecting that the array of challenges pending in the lower courts (122 at last count) by nonprofits claiming that signing the opt-out form violates their religious liberty, might now be resolved in favor of the government. Days later, the respect it afforded religious liberty is not enough. The new unsigned opinion in Wheaton suggests that the fix to Monday’s problem—signing a form—is now a religious burden. At this rate, by next Tuesday the court will have decided that religious objectors can more readily opt out by way of a Bat Signal to HHS. Which said workaround, in turn, will soon be found to offend religious freedom.

But Jonathan Adler pushes back on that argument, which is also the crux of Sotomayor’s dissent:

So, while the Court did “expressly rely” on the accommodation’s existence to conclude that the mandate was not the least-restrictive alternative, this in no way precludes the Court from upholding RFRA claims against the accommodation if and when such a claim is before the Court in a future case.

Steve Chapman doubts Wheaton’s objection will hold up in the end, anyway:

Their argument was always a reach. Filling out a form claiming an exemption is not much trouble. Nor does it make these institutions complicit in sin: The insurers have to provide the coverage even if they don’t fill out the forms. In this instance, Judge Richard Posner of the 7th Circuit Court of Appeals said in ruling against Notre Dame, the odd thing is that “the beneficiaries of the religious exemption are claiming that the exemption process itself imposes a substantial burden on their faith.” He compared it to a conscientious objector asking out of the draft while insisting that the government not draft anyone else instead.

But the way the court framed the Hobby Lobby opinion makes it even less likely to succeed. The justices in the majority, who stressed that the government can use an alternative means of providing contraception, are not likely to turn around and say the alternative is illegal.