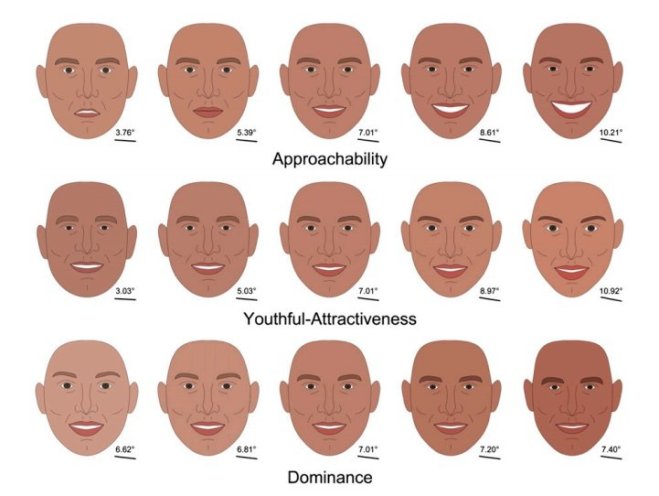 A new study investigated how facial features play into our initial social judgments:

Each subject rated the faces on most-to-least scales for 16 traits, such as attractiveness and trustworthiness. The social traits were then evaluated in terms of three measures: approachability, youthful attractiveness and dominance.

For approachability, facial features concerning the mouth, such as mouth shape, were the most important. As seen in the image of model-generated faces (above), the corners of the mouth point slightly downward in the less approachable faces and turn upward in the visages that were scored as more approachable. …

In terms of youthfulness and attractiveness, characteristics of the eye and eyebrows were most strongly linked with the measure. For example, in the illustration above, the face farthest to the right features larger eyes and eyebrows with a more dramatic arch. As for dominance, that measure was most associated with facial features that may be construed as stereotypically masculine.

The study’s lead researcher, Dr. Tom Harley, is cautious about the results:

“Lots of the features of the face tend to vary together,” he explained. “So it’s very difficult for us to pin down with certainty that a given feature of the face is contributing to a certain social impression.”

There are some obvious trends however – including the tendency for masculine faces to be perceived as dominant, or for a broadly smiling face to seem more approachable and trustworthy. This points to a potentially worrying implication: brief facial expressions can make a big difference to how we are received by strangers.

“It might be problematic if we’re forming these kind of judgements based on these rather fleeting impressions,” Dr Hartley said, “particularly in today’s world where we only might see one picture of a face, on social media, and have to form our impression based on that.”