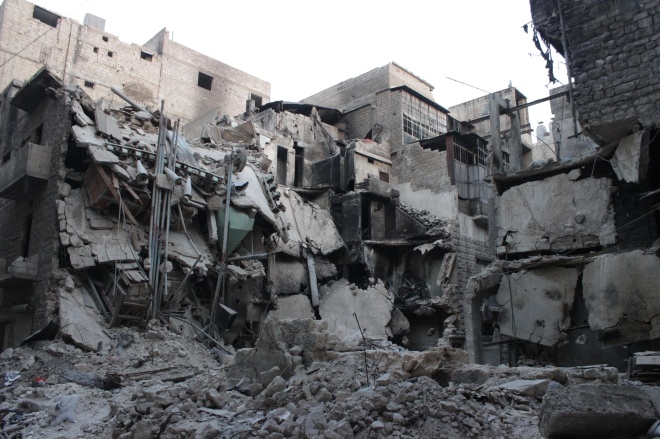 Robert Ford disputes the conventional wisdom that the non-jihadist rebels in Syria are more or less finished:

The death of moderate armed opposition elements has been greatly exaggerated. These groups — whom I define as fighters who are not seeking to impose an Islamic state, but rather leaving that to a popular decision after the war ends — have recently gained ground in Idlib province in northwestern Syria, and have nearly surrounded the provincial capital. If the rebels are ever to demonstrate military capacity, it should be in Idlib, where the supply lines from Turkey are easily accessible.

Their advances over the past month also extend beyond Idlib. Notably, moderate armed groups repelled regime attacks in the vicinity of the town of Morek, in west-central Hama province, and also advanced on the Hamidiyah air base there. They even damaged aircraft at the air base, with some reports claiming that they used surface-to-air missiles. Moreover, they launched renewed rebel incursions into Damascus from the nearby eastern suburb of Jobar on July 25 and 26.

But Charles Lister paints a very different picture of the rebels’ condition, warning that they appear to be losing the long battle for Aleppo and its environs to both the Assad regime and ISIS:

The military has followed air bombardment with methodical but effective ground incursions that, over time, have enabled it to re-capture territory and force a rebel retreat to the city’s northern districts. As such, the opposition is now in its weakest position in Aleppo city since mid-2012. … But although regime advances in Aleppo city are extremely significant, the most immediate threat comes from ISIS and its rapid advance north of the city.

Controlling Dabiq, one of the villages that AFP reported was seized Wednesday, is already extremely symbolic for ISIS, whose official magazine is named after the town for its role in the hadith — the teachings, deeds, and sayings of the Prophet Mohammed — as the site of a major battle before the end of the world. Abu Musab al-Zarqawi, who founded ISIS’ precursor group, once said the capture of Dabiq would represent the first step towards conquering “Constantinople” and “Rome.” With those villages in hand, ISIS now seems likely to move forward on two primary fronts — northwest towards Sawran and eventually Azaz and southwest to Liwa al-Tawhid’s stronghold in Marea.

Zaher Sahloul zooms in on the regime’s targeting of hospitals and health care workers:

According to Doctors Without Borders and other human rights organizations, the Syrian regime and some of the military groups have systematically targeted health care professionals, facilities, and ambulances. Physicians for Human Rights said government forces were responsible for 90 percent of the confirmed 150 attacks on 124 facilities between March 2011 and March 2014, which have devastated the country’s health care system. Of the more than 460 civilian health professionals killed across Syria, at least 157 were doctors, followed by 94 nurses, 84 medics, and 45 pharmacists. Approximately 41 percent of the deaths occurred during shelling and bombings, 31 percent were the result of shootings, and 13 percent were due to torture.

The crisis has forced many doctors to flee to neighboring countries. I heard of a doctor from Aleppo who decided to take the risky trip from Libya to Malta with his wife and three children by boat, trying to reach Europe, but they all died when the boat sank in the Mediterranean.

(Photo: A view of a damaged buildings after barrel bomb was dropped. At laest 17 people were killed and wounding dozen others after Syrian regime helicopters dropped barrel bombs on an opposition-controlled areas at Bab al-Nairab district in Aleppo, Syria. (Photo by Karam Almasri/Pacific Press/LightRocket via Getty Images)