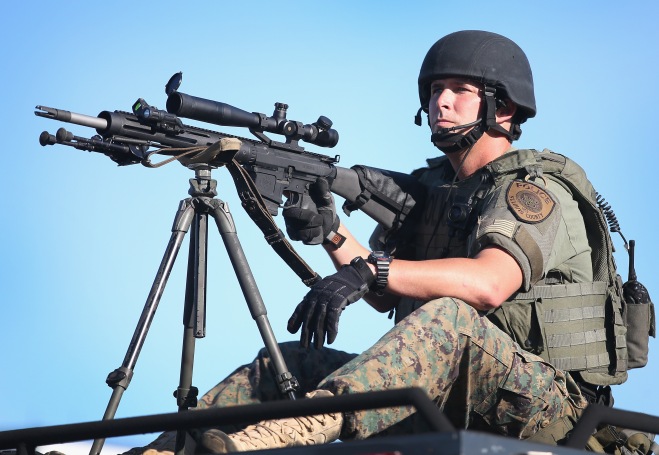 When the ACLU asked officials in the town of Farmington, Missouri (less than a 90 minute drive from Ferguson) to provide a copy of training materials for its Special Response Team, which is roughly like a SWAT team, the town sent only a copy of a single article. The article warned that “preparations for attacks on American schools that will bring rivers of blood and staggering body counts are well underway in Islamic training camps,” and went on to say that “because of our laws we can’t depend on the military to help us … By law, you the police officer are our Delta Force.”

In contrast, SWAT programs in larger cities tend to train extensively, and constantly. The Los Angeles police department’s SWAT teams go through months of intensive training before being brought on, and once there spend at least fifty percent of their on-duty time training, former LAPD Deputy Police Chief Stephen Downing told me. It is effectively impossible, Downing suggested, for small police departments to appropriately train their officers in the use of SWAT-style equipment, because they simply do not have sufficient resources or personnel. Small departments simply do not have the resources to support that type of program, but they do have the guns and trucks and armor, which they use.

Taub also runs down some of the military equipment the Ferguson cops are using:

Mine Resistant Ambush Protected Vehicles, or MRAPs, are heavily armored trucks designed to withstand the detonation of land mines or IEDs. They were first deployed by the US military in 2007, designed specifically for use in Iraq, where al-Qaeda and Iranian-backed Shia militias were using highly developed IEDs. Now the vehicles are being passed down to police departments.

A Homeland Security report obtained by the Electronic Frontier Foundation in 2013 revealed that the agency has considered outfitting its expanding inventory of drones with “non-lethal weapons designed to immobilize” targets of interest. Meanwhile, both Homeland Security and the Pentagon maintain a keen interest in developing crowd-control weapons for occupations at home and abroad. In 2007, the department’s science and technology arm “contracted for the development of the ‘LED Incapacitator,’ a nauseating strobe” weapon meant to overwhelm and disorient targets with rapid, random pulses of light.

Some have called it the “puke saber,” but the final product won’t necessarily be handheld. As the department noted in a cutesy blogpost entitled “Enough to Make You Sick,” “output and size can easily be scaled up to fit the need; immobilizing a mob, for instance, might call for a wide-angle ‘bazooka’ version.”