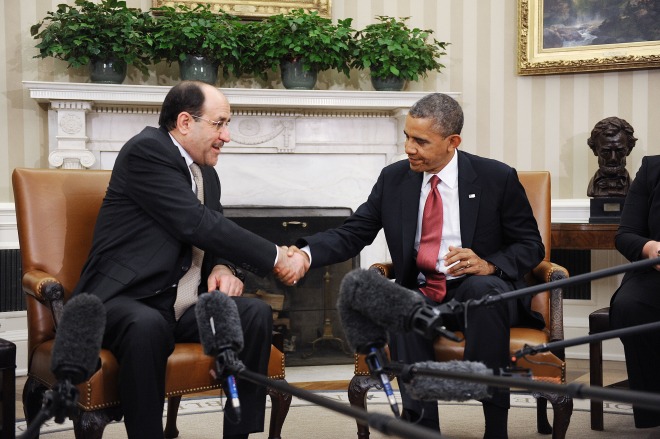 In contrast to the right’s caricature of Obama as a president too feckless to stand up to our enemies, Benjamin Wallace-Wells posits that his real quandary is “whom the United States might trust — the problem of friends”:

The futile hunt for friends characterized the long Obama withdrawals from Afghanistan and Iraq. In Syria, the long, pained, ultimately failed search for a tolerable proxy in the opposition precluded any American involvement, a hesitation that now looks like the biggest foreign-policy error of Obama’s presidency. During the Gaza conflict, Obama was far cooler towards Israel than his predecessors have been. If you want to hang back from the front lines, to hover overhead and urge your friends to the front lines, then the question of exactly who those friends are becomes crucial. ISIS, in its radicalism and its cartoonish barbarism, solved the enemy problem for Obama. It hasn’t completely solved the matter of the friends. Obama spoke confidently about the new, “inclusive” government that Iraqis had formed “in recent days.” Given the long history of sectarian animosity and slaughter in Iraq, it seems worth wondering whether this new coalition of a few days duration will hold under the pressures of a war.

Afzal Ashraf calls the decision to rely on regional partners “the most immature and risky part of the US strategy”:

Middle Eastern countries have spent billions on their defence capability but have shown a remarkable reluctance to deploy it beyond quelling mostly unarmed civilian rebellions. A history of petty squabbling and so little experience of political cooperation or joint military operations further reduces their potential impact. If the anti-Iranian attitude of the Saudis and other Gulf states is not checked before any troops from those countries arrive in Iraq then there is a danger of sparks flying if they come into contact with the Iranian military “advisers”, who appear to be advising very close to the frontline. Increasing efforts to remove President Assad from power in Syria is probably the greatest strategic flaw. Identification and maintenance of a single clear aim is a maxim of strategic success. If defeating Isis is the main aim of this strategy then why complicate an already difficult task by simultaneously engineering regime change in Syria?

Bobby Ghosh makes the easily overlooked point that Arab leaders who join this war will have to sell their publics on it as well:

The template for the coalition against IS should be the international effort in 1991, marshaled by another US secretary of state, James A. Baker III, to drive Saddam Hussein’s forces from Kuwait. The presence of many Arab nations was not only vital for the military strategy, it also prevented Saddam from portraying the conflict as a battle between Islam and the West. Kerry will no doubt invoke the Baker coalition in his conversations with Arab officials in Riyadh.

But as effective as the 1991 military campaign was, many Arab people felt no sense of ownership over the victory. Their leaders had not sought their approval, and had failed to explain why it was necessary to join non-Arab armies to eject Saddam from Kuwait. This explains why Saddam remained popular among Arabs long after his defeat in Kuwait. It also allowed Osama bin Laden to portray the 1991 campaign as an unholy alliance between Arab elites (mainly the Saudi royal family) and the Western “crusaders.”

Turkey, for its part, is already signaling that it wants no part in combat operations, while the UK and Germany also appear to be bowing out of the air campaign. That doesn’t comfort Daniel Larison:

The lack of Turkish cooperation will presumably make the air campaign more difficult and therefore make it last even longer. The more striking thing about this is that the U.S. is going back to war in the region and still cannot count on support from its sole NATO ally in the region. That draws attention to one of this war’s basic flaws: the U.S. is taking the regional threat from ISIS more seriously and doing more to oppose it than many of the regional states that have far more to lose. The U.S. has allowed itself to be pulled into a new, open-ended war for the sake of “partners” that are contributing little or nothing to the war.

[W]hat does this say about Obama’s strategic preparation? Did he bother to check in with the Brits and the Germans before pledging his “broad coalition of partners” last night? It would appear not, and that Obama just assumed that they would follow whatever plan he laid out last night. Obama could have framed the Syrian phase separately as a uniquely American security concern and set expectations properly. Instead, it looks as though Obama and his political team wrote a speech without building the necessary commitment from allies to allow them to be part of a united front on global security.

There’s also that niggling matter of finding an acceptable partner in the chaos of the Syrian civil war. Keating complicates that question, reminding us that the task of dividing the belligerents into “good guys” and “bad guys” is not nearly as clear-cut as we’d like it to be:

While the Syrian civil war may once have been viewed as a fight between Assad’s regime and “the rebels,” it’s now much more complicated than that. The major groups now fighting for territory and political influence within Syria include (but are not necessarily limited to): the government; ISIS; the Western-supported Free Syrian Army; the al-Qaida-affiliated Jabhat al-Nusra; the Kurdish PYD, which has gained control of significant territory in areas near the Turkish border; and the Islamic Front, an umbrella group of Islamist groups distinct from both the “moderate” rebels of the FSA and the hardline jihadists in ISIS and Nusra. The last group on that list has gotten relatively little attention, but recent events show it could be critical. A bombing in northern Syria decimated the leadership of Ahrar al-Sham, a long-established and well-organized rebel group that was one of the primary organizers of the Islamic Front alliance.

And Thomas Pierret and Emile Hokayem make a fresh case against allying with Assad:

Given its lack of homegrown manpower, the regime has owed its survival to auxiliaries in the Alawite-dominated National Defense Forces—an evolved, more sophisticated version of the shabbiha militias—and foreign Shia fighters from Iraq and Lebanon. As in Iraq, this has further alienated the Sunnis, with the difference that in Iraq, at least, these militias are entirely homegrown. This is the point of the argument where those who favor working with Assad point out that defeating the Islamic State will require deploying ground troops in large number—and in the very regions that Assad’s forces have intensively pummeled since 2011. Here’s the rub: Local populations in these areas, crucial to the success of any counterterrorism effort, are unlikely to cooperate with their recent oppressor. Sending pro-Assad sectarian forces back into the Islamic State’s safe haven in northern and eastern Syria would only lead to more communal violence—but almost certainly not victory.