For those just tuning in, Fisher does a good job summarizing why Hong Kongers have taken to the streets:

Today, the territory’s chief executive Leung Chun-ying asked Occupy Central to disband the demonstrators, casting the disorder as a threat to public safety, but the protest leaders are demanding a face-to-face meeting with Leung and threatening to occupy government buildings if the demand is not met. Christopher Beam takes the pulse of the protest movement going into this week:

The conventional wisdom after the Sunday night clashes was that the movement had lost momentum. But my conversations with protestors on Monday suggested the opposite. Many of the people I spoke with didn’t come out until after the police cracked down. Henry Wong, 19, a student at Chinese University of Hong Kong, decided to join after seeing a live broadcast of students fighting with police. “I’m here so I can sleep at night,” he told me. Michelle Chan, 18, also said she was galvanized by the use of force: “Police don’t have to be that cruel.” Tony Wong, 24, said he was skipping work to come to the protest. I asked if his boss would be upset. “I can get another job,” he said. “I can’t get another Hong Kong.”

The protests appear to be growing. Wednesday and Thursday mark a national holiday in China, and many expect what takes place on those days to define the current unrest. If the sit-ins and demonstrations continue with the intensity they’ve already shown, there’s a chance that local security forces could crack down more violently than they have so far, including perhaps using rubber bullets. That sort of violent response could be a disaster for Hong Kong’s government, which would face mounting pressure from the territory’s voluble civil society and media.

Twenty five years ago, we saw what happened when a threatened Beijing is backed into an existential confrontation. Today, China is a country with a triumphal sense of infallibility. It is so resolute and confident of its sovereign power that it can deliberately taunt large neighbors like Vietnam and India as a matter of routine. Hong Kong is a mere flyspeck by comparison, and a domestic concern at that. Of course, this is not June 1989, and Hong Kong is not the capital. But the protesters need to realize what they’re dealing with here: a state that will use lethal force if it deems it necessary. Then there’ll be real tears.

Update from a reader on the ground:

Julian Snelder says, “But the protesters need to realize what they’re dealing with here: a state that will use lethal force if it deems it necessary. Then there’ll be real tears.” I’m in Hong Kong. I’ve been at the demos. My students are out there every day. Barring small children, there is not one person who is not vividly aware of this possibility. Julian Snelder, whoever he is, is a patronising git. What gives him the right to assume that courageous people are stupid instead?

Adam Taylor explains why the umbrella has become a symbol of the protests: 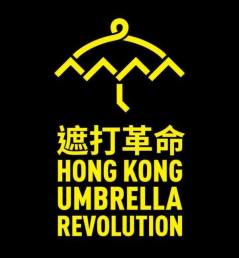 Protesters used whatever they could get their hands on for protection: Some images even show people using plastic wrapping to cover themselves. The use of the umbrellas as protection was striking, however, and media outlets picked up on it, dubbing it the “Umbrella Revolution.”…

Some protesters painted messages on top of their umbrellas, and artists began incorporating umbrellas into logos designed for Occupy Central. “I was inspired by seeing people defend themselves with domestic props,” Hong Kong artist Kacey Wong told the BBC. “The contrast was so marked. On the one side there was police brutality and on the other side there were these poor umbrellas.”  According to the Associated Press, umbrellas are now being donated to replace those destroyed by the police.

Historian Jeffrey Wasserstrom feels that it’s “important to make space in our minds for partial victories”:

It’ll be very hard for the Communist Party to say “Okay, there will be open and free elections.” That’s unlikely to happen.

On the other hand, the protestors are calling, quite specifically, for the current chief executive of the territory to step down. That’s very thinkable: he would become a scapegoat for larger problems, but it would defuse some of the anger over the protests. And if even the person who replaced him had similar policy views, it would be a sign to that official that there would be a value in being more responsive to the people.

(Image from FP’s round up of viral Hong Kong graphics)