What are your options today as a gay man with a sex life in America? You live in a community where a deadly virus has killed hundreds of thousands and is still resilient in the gay male world as a whole. It has no external or visible symptoms most of the time. Many people have no idea they have it. But the virus can be permanently suppressed to a point where it cannot be measured in your bloodstream and to a point where an HIV-positive man cannot transmit the virus to another person. And someone who is HIV-negative can also have access to a daily pill that, if taken conscientiously, all but wipes out the chance of getting infected.

Here are your options: the blue pill or the red pill. Take the one-pill-a-day Truvada (below right) and never get HIV; take the often one-pill anti-retroviral pill (like atripla, below left), and 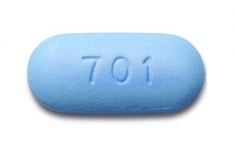 you will never give someone HIV. To make doubly sure, you can always use a condom. Except almost every man who ever had sex hates condoms – and, unlike a pill you take every day, wearing a condom means making a decision in the middle of sexual desire and passion when your rational self is at its weakest.

For me, this seems obvious – partly because I have been through the HIV mill for my entire adult life. I was dumped by an HIV-positive man when I was HIV-negative; I was dumped by countless HIV-negative men because I was positive; I have had an undetectable viral load for nearly two decades; and I am open about my HIV status – even to the point of risking deportation; I’ve been publicly shamed by HIV-negative gay men for seeking sex only with other HIV-positive men. I have navigated relationships with men on both sides of the divide – and yet the divide remained. These trials-by-fire are mercifully not always the norm any more – but that means that the young generation has fewer psychological resources or experiences with HIV to grapple with the whole issue of getting infected, or avoiding infection, or navigating sex with the issue of HIV menacingly in the way. Which may be partly why the younger generation remains the one most at risk. The trauma of the distant past still echoes in the collective psyche; this is still a disease people feel ashamed of; it is still a disease which other gay men will stigmatize and ostracize you for; it is still a disease that your friends and family regard as terrifying – even though it is no more rationally terrifying at this point than diabetes. It still compels you into denial; or fear; or blame; or ostracism.

And so our psyches are lagging behind the science – and behind the epidemic. And one of the most powerful aspects of that traumatized psyche is the division between HIV-positive men and HIV-negative ones. It’s been there from the very beginning – this segregation of fear. But surely, at this point, there is no reason to continue the segregation. What matters is not whether you are HIV-positive or HIV-negative. What matters is whether you know your status and are on one medication or the other. Once that is true, sex can cross the bridge once more. The pills can erase the stigma and the divide – if we really want them to.

There’s a terrific new piece in Poz magazine that explores much of this territory. It weighs some of the risks of the Truvada revolution, but it also illuminates the liberation of it as well, the amazing promise that the viral Jim Crow can be dismantled at last:

Out of the dozens (nearly all of them gay men) who shared their stories about being on PrEP for this article, many described life-altering sexual and personal renaissances as, for the first time ever, they discovered what it was like to have sex without fear.

“PrEP makes me feel good about being gay,” says Evan (some of those interviewed preferred to use their first names only), a 22-year-old full-time sex worker living in Washington, DC. “Growing up gay is still really hard. The first things that we learn about our sexuality are that some people aren’t going to like us, and that we are probably going to get HIV. Taking PrEP has allowed me to step into my sexuality and feel empowered.” PrEP, he adds, “has led me to accept all gay men as a potential friend, sex partner or life partner regardless of their HIV status.”

Another man, dogged by the threat of HIV his whole life, expresses how he feels about taking Truvada this way: “I felt free, finally. For the first time since I was a kid, I know my sexuality is not going to be the cause of my death.”

The discourse around this new breakthrough has long been about risks and expense and compliance and how to make sure men don’t get too promiscuous again. And all that has its place. But we fail to understand this moment if we do not understand the liberation that comes with ridding gay sex of the terror and stink of death, the liberation that comes with leaving a world where another man – before he can be anything to you – has to be put in a “positive” or “negative” box. Or to put it another way:

Sex is about intimacy; it is about love; it is about relief. And for the first time since the early 1980s, we have a chance to rid it of fear. Why are we not rushing to embrace this? What is still preventing us from becoming collectively a force for love and friendship that is no longer limned with terror?