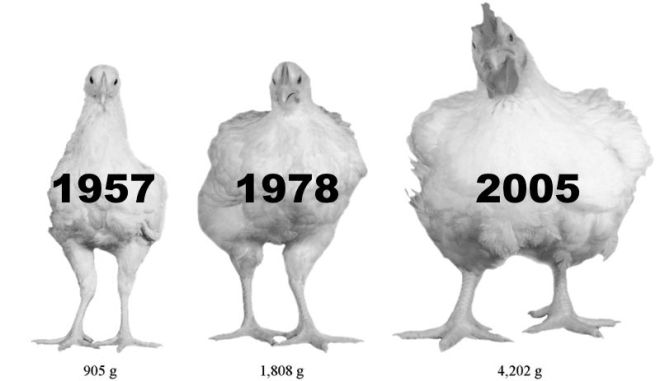 The delicious creatures have grown a lot in 50 years:

The one on the left is a breed from 1957. The middle one is a 1978 breed. And the one on the right is a commercial 2005 breed called the Ross 308 broiler. They’re all the same age. … The image above comes from a study done by researchers at the University of Alberta, Canada, who raised three breeds of chickens from different eras in the exact same way and measured how much they ate and how they grew. This allowed them to see the genetic differences between the breeds without influences from other factors like food or antibiotic use.

They remind me of how football players have grown in the same period. Meanwhile, Christopher Leonard examines the modern poultry industry from a different angle, focusing on “the tournament,” a “secretive system that companies like Tyson use to pay chicken farmers, which … pits farmers and communities against one another to earn a living”:

[C]ompanies like Tyson keep a tally of the farmers who deliver chickens to slaughter. Based on how well they fattened the birds on a given ration of feed, the farmers are ranked against each other. At the end of a given week, Tyson will mail out tournament results to all the farmers whose birds were processed. Farmers will learn how they ranked, how many players were in the tournament, and how much weight their birds gained on their feed rations. Those at the top receive premium payment, while those at the bottom are financially penalized. …

Poultry companies say the tournament incentivizes farmers to work hard, which might make sense if they had any control over their operations. But the success of a given flock of chickens rests on the quality of feed the birds eat, and the healthiness of the chicks when they’re delivered. A farmer can be a genius, can put in ten-hour days, seven days a week, but he will not raise a good batch if his feed is bad or he gets sickly chicks. His impact is on the margins: if he completely neglects his birds, they won’t gain as much weight. If he’s in the chicken houses constantly, they’ll gain a little more. Farmers pray for good birds and feed, and the tournament is laid bare as a lottery.