As we enter a year of debate and discussion about the family in Catholic teaching, it’s obvious, thanks to Pope Francis’ skillful airing of the divides, that there is no consensus on the issues of treating the divorced or single parents or homosexuals, and a majority of bishops in favor of the status quo. But it’s worth noting at the same time what American Catholics actually believe. They are increasingly one of the most socially progressive groups in American society and culture. When I am asked by many outsiders how I can remain in a church that does not welcome me or my kind, I have to respond that I have rarely experienced anything but welcome. My fellow Catholics are almost always obviously comfortable around their gay fellow-parishioners, as are, mercifully, many priests.

Check out this graph, for example, on the question of sodomy – yes, full-fledged sodomy – over the decades in American life: 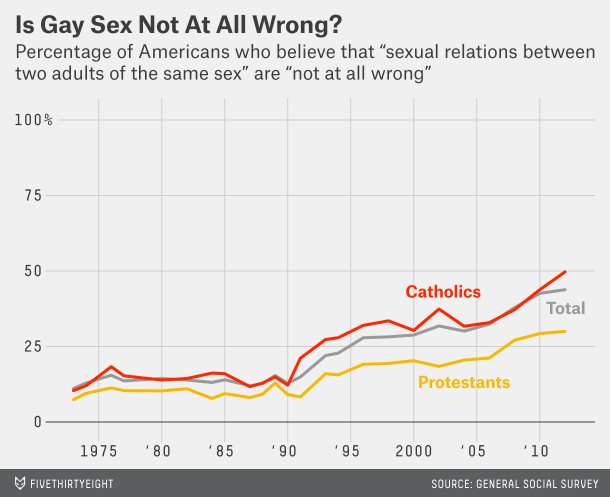 If you wanted a religious vocation that was all about endorsing gay sex (not something I would ever recommend), you should rush to be a Catholic! Carl Bialik’s data-driven analysis even finds the correlation between Catholicism and social liberalism to endure across cultures and countries:

We didn’t have data broken down by religion in individual countries, so instead I examined how attitudes within countries corresponded with the percentage of their population that is Catholic. In general, the higher a share of a country’s residents are Catholic, the higher percentage of residents express tolerance toward divorce and towards gays. The effect isn’t huge, but it’s consistent.

I immediately went to read Rod Dreher to see his head exploding. In fact, he agrees:

I think most conservative Catholics intuit this, which accounts partly for their anxiety over the prospect of Rome’s waffling. They know that they are minorities within their own church, and they grieve over the possibility that the Church itself may undercut their convictions.

Rod’s point is that only this minority can really be counted upon to support the church’s work and so any liberalization in pastoral outreach to the gays or the divorced would be counter-productive. I’m not sure where he gets this idea. The liberal parishes I have attended seem brimming with volunteers and life. And notice that Francis has not argued that the doctrine should change anyway. He is pushing for the pragmatic embrace of those whom the hierarchy regards as “intrinsically disordered” or “living in sin.” He is arguing that Catholics’ general empathy for the outsider and the downtrodden – and forgiving response to sinners – should be reflected in the hierarchy as well. He is arguing for the church to be more what it is already.

As for those conservative Catholics, whose presence in the church is vital and important, one has to ask a simple question. Why are their convictions so weak that they require constant reaffirmation from Rome or the pulpit? Why is it impossible to coexist with others of a more liberal mindset – and not fight to the death over these issues as if they had the same potency and salience of other far more vital aspects of Christianity? Why can they not hang in with the church the way so many more liberal Catholics have during the papacies of John Paul II and Benedict XVI?

I think most Catholics’ response to these issues is the Pope’s: who am I to judge? And that response is essentially a Catholic one – and, in my experience, it cuts across the “conservative” and “liberal” positions to a more humane equipoise.