This reader liked the book, to say the least:

​I am 69, an atheist, and a retired engineer.  Until I read about Waking Up on the Dish, I had never heard of Sam Harris. Because of his book, not only will I die happily, I will be happier for the rest of my life.  For a long time I struggled with questions such as “Where was I before I was born?” and “What happens to me after I die?” I had not researched to find answers to my questions. However, the scientific and philosophical discussion by Harris has convinced me that consciousness is self (I). My perception of I is just my consciousness. Bingo! Now I am not worried about “I.”

Waking Up will not change many minds, as you suggest. But it may help many individuals like me who are not deep thinkers. Thanks for paving my way to enlightenment.

Another offers a critique: 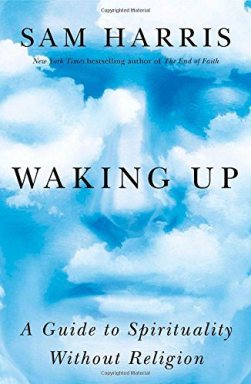 constructing another in its place – consciousness and sensory perception. As if consciousness is any easier to define as a continuous, knowable entity than self. A valid argument could be made that he’s simply substituted one term for the other and both are subject to the same powerful criticisms he makes against self – that both are elemental, Western constructs of spirituality that don’t survive analytic examination.

What are we left with then, if that’s the case? A construct of consciousness that, on the most basic level, is completely reducible to brain waves and other sensory input. Humans may seem to be more complex organizations than, say, rocks and debris. The brain is a wonderfully mysterious organ to behold, after all, especially by its owner or someone similarly placed. And true spiritual oneness with the world could start by meditation and a loosening up of the dualistic approach we utilize to strap the world down on a gurney and do with it as we please.

But Harris might need one more nudge in an Eastern direction, to get his argument fully down. He’s wedded himself to the existence of consciousness, despite acknowledging all along that it is not scientifically provable (except, he argues, through self-examination).

Or one nudge back West, in which the richness of human experience and thought cannot be reduced to neurons, without making it meaningless. Another reader turns the critique toward me:

Like many, I found Sam’s book enlightening and deeply challenging. And, like you, in the end I found myself unable to follow him into the complete annihilation of the self; it is too intuitively, phenomenologically present, it seems to me, to accept Sam’s dismissal. But the

traditional Western view of the self seems also unsatisfactory, hence the value of trying to see things from a different perspectives.

However, I also cannot accede to your Christian idea of a self relating to an altogether different and greater entity or being (which, only too often, amounts to the projection of human personality traits onto God, emotions such as love or anger or jealousy).

The reconnection we seek is not a reaching over to something else, something outside ourselves, but rather it is the realization of our actual natures. We are God experiencing what it is to be finite (something the God of St. Thomas, in Her fullness and actuality, cannot do despite being all-powerful) – how to lose at poker, how to be amazed at a new discovery, how to misunderstand something, how to experience and then solve a puzzle, how to fear death. And because there seems to be only one way to be infinite, but an infinite number of ways to be finite, God experiences finitude in an infinite number of modes.

I was disappointed that Sam only tangentially mentioned Advaita Vedanta (and then to reduce it to basically another version of Buddhism). I think there is a deeper-than-semantics difference in the Atman/Anatman debates between these two traditions, even if at a certain level they come to agreement. For me, the Brahman-Atman position is most agreeable at present. We are not different from God, we are God, though we have lost this realization. In that sense, our personal selves are chimerical, though we experience ourselves as quite real. Regaining that realization may well be the purpose of life.

He compares it to astronomy before Galileo’s invention of the telescope.  You and your readers, absent meditation, would be like astronomers absent telescopes debating the likelihood of Jupiter having moons.  Everyone will have their arguments; they can have a good old fashioned debate about it.  It is even theoretically possible that these astronomers might, through elaborating the theory of gravity, be able to conclusively conclude that such moons almost certainly do exist.  Or they could build a telescope and see them.

In the same way, through the instrument of meditation, anyone can see for themselves that the concept of self is empty.  Not that there is or is not a self, but that idea of self is just that: an idea.  A “thought.”  And a deceptive thought, at that. It’s like if you think there is someone in your bed, and then you turn on the light and see that it is merely the arrangement of the pillows and blanket.  There is no longer any doubt about the situation.  When you see it, you may experience a brief blissful feeling of transcendence such as the one the Pope experienced, and that almost all of us have felt at one time or another.  That feeling won’t last – the illusion of the self is far too strong – but what will remain is the certainty that the self is, in fact, a persistent illusion.

Then begins the slow, rewarding process of honing one’s ability to live more and more with that liberating knowledge, and less and less out of the false sense of self.  But this is not something to argue about or offer opinions on.  It’s something to know.

Another recommends a must-listen:

A far more fascinating account of no-self for me comes from the This American Life episode on testosterone. The account given by the man whose body stops producing testosterone is one of the best descriptions of non-attachment/no-self I’ve ever heard.

Follow the whole Book Club discussion here. And join in by emailing your thoughts to bookclub@andrewsullivan.com.