Daniel McCarthy revisits the obscure legacy of James Burnham, an ex-Marxist and philosopher who was an important figure in the postwar conservative intellectual movement (e.g. he was one of William F. Buckley’s first hires at National Review). Calling Burnham the “American Machiavelli,” McCarthy details how he “broke with Trotsky, and with socialism itself, in the 1940s, and he sought a new theory to explain what was happening in the world”:

In FDR’s era, as now, there was a paradox: America was a capitalist country, yet capitalism under the 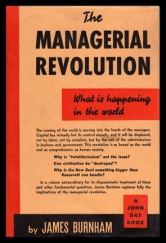 New Deal no longer resembled what it had been in the 19th century. And socialism in the Soviet Union looked nothing at all like the dictatorship of the proletariat: just “dictatorship” would be closer to the mark. (If not quite a bull’s-eye, in Burnham’s view.)

Real power in America did not rest with the great capitalists of old, just as real power in the USSR did not lie with the workers. Burnham analyzed this reality, as well as the fascist system of Nazi Germany, and devised a theory of what he called the “managerial revolution.” Economic control, thus inevitably political control, in all these states lay in the hands of a new class of professional managers in business and government alike—engineers, technocrats, and planners rather than workers or owners.

The Managerial Revolution, the 1941 book in which Burnham laid out his theory, was a bestseller and critical success. It strongly influenced George Orwell, who adapted several of its ideas for his own even more famous work, 1984. Burnham described World War II as the first in a series of conflicts between managerial powers for control over three great industrial regions of the world—North America, Europe, and East Asia. The geographic scheme and condition of perpetual war are reflected in Orwell’s novel by the ceaseless struggles between Oceania (America with its Atlantic and Pacific outposts), Eurasia (Russian-dominated Europe), and Eastasia (the Orient). The Managerial Revolution itself appears in 1984 as Emmanuel Goldstein’s forbidden book The Theory and Practice of Oligarchical Collectivism.

Despite how closely Burnham is associated with the Cold War, McCarthy asserts his continued relevance:

After all, the managerial Soviet Union is gone, and the capitalist U.S. has not only survived but thrived for decades in what is now a globalized free-market system. While the political theory of The Machiavellians doesn’t depend on The Managerial Revolution—it’s surprising, in fact, how little connected the two books are—his reputation must surely suffer for getting such a basic question wrong.

Only he didn’t get it wrong—for what is the political and economic system of China if not what Burnham described in The Managerial Revolution? Engineers, industrial planners, and managers have led China for decades, with unarguable results. Indeed, several East Asian economies, including those of American allies Taiwan, South Korea, and Japan, are managerialist. As Burnham predicted, these economies have been highly successful at controlling unemployment and raising standards of living.

The American ruling class, by contrast, has pursued a largely anti-managerial policy, ridding the country of much strategic manufacturing. Such industry—including shipbuilding and semiconductor fabrication—is now overwhelmingly based in Asia. The U.S. hybrid system, transitioning from capitalism to managerialism, outperformed the Soviet Union. Whether it can outperform the next wave of managerial revolution is very much uncertain.