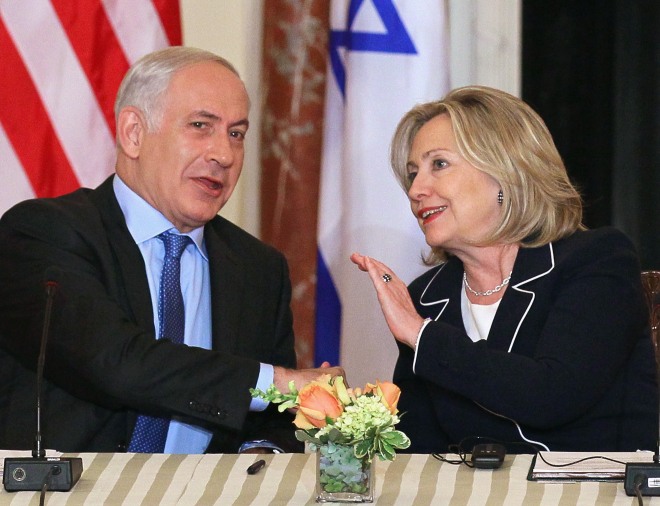 If she’s elected, Aaron David Miller predicts that the second President Clinton will bring a quick thaw to American-Israeli relations:

Given the lack of competition, unless he stumbles badly, Netanyahu may well outlast Obama. And that brings us to the matter of Hillary Clinton. Those of you looking for a new sheriff in town — one who is willing and able to teach those Israelis a lesson, cut them down to size, and make it clear to them as Bill Clinton, who exploded in frustration following his first meeting with Netanyahu in 1996, did when he said, “Who’s the fucking superpower here?” — best lay down and lie quietly until the feeling passes.

Indeed, she conceded in her book Hard Choices that she was never comfortable playing the bad cop with Netanyahu to Joe Biden’s more even-tempered good cop. And yet, she has some natural advantages that would help mitigate some of the gratuitous tensions that have made an already tough relationship tougher and perhaps lay the groundwork for more productive cooperation. Should she become president, on one level, better ties with Israel are virtually guaranteed.

But while a more accommodating White House would be a boon to Netanyahu’s government, Larison stresses that it won’t exactly be good news for anyone else:

Miller’s main argument is that Clinton will probably manage the relationship with Israel more successfully than Obama has. That could be true, but it is worth noting that in practice this “better” management will be little more than endorsing and backing whatever the Israeli government does. Obama has occasionally, briefly put a little bit of pressure on Israel to maybe modify its most obnoxious policies ever so slightly, and the relationship is at its lowest nadir in twenty years and Obama is reviled for his supposed “hostility” to the country. The Bush approach was to enable and excuse almost everything that the Israeli government did or wanted to do, and Clinton seems interested in imitating Bush’s example.

(Photo: Israeli Prime Minister Benjamin Netanyahu talks to U.S. Secretary of State Hillary Rodham Clinton during the first day of direct trilateral negotiations about a Middle East peace plan in the Benjamin Franklin Room at the Department of State on September 2, 2010. By Alex Wong/Getty Images)