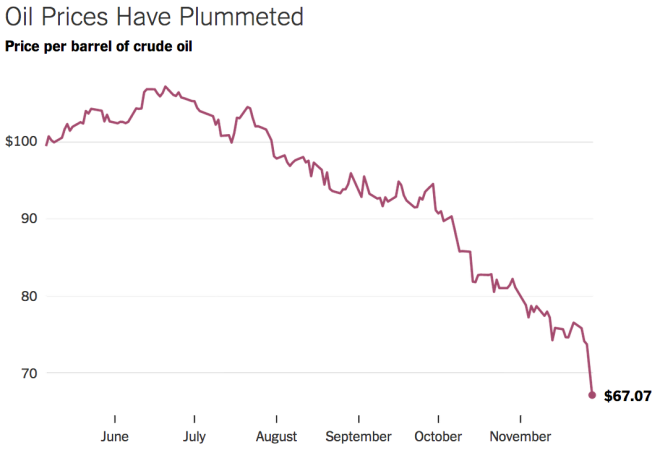 The price of oil was down more than 9.9 percent Friday afternoon after the Organization of the Petroleum Exporting Countries decided it would not cut back production significantly in the months ahead. In other words, even amid a sluggish global economy and a boom in oil production in the United States, oil-producing countries from Saudi Arabia to Nigeria to Venezuela are going to keep pumping rather than pull back on output in hopes of pumping prices back up.

Apparently, OPEC is “playing a long-term game in which it tries to obliterate some of its American competition by letting prices fall in the hope that some American producers go bankrupt.” Brad Plumer provides more details on that front:

The catch is that no one quite knows how low prices need to go to curb the US shale boom. According to the International Energy Agency, about 4 percent of US shale projects need a price higher than $80 per barrel to stay afloat. But many projects in North Dakota’s Bakken formation are profitable so long as prices are above $42 per barrel. We’re about to find out how this all shakes out — and which numbers are correct.

Part of the problem here is that media and analyst commentary has juxtaposed the refusal of OPEC countries to slash production now with an imagined world in which OPEC regularly tweaks output to stabilize the market while avoiding large price swings entirely. Seen through that lens, last week’s inaction looks like a radical departure. But, as Bob McNally and Iargued in 2011 (and revisited a few weeks ago), OPEC has been out of the fine-tuning game since at least the mid-2000s, and even Saudi Arabia has been a lot less active at it than before. Our view wasn’t particularly unusual. (See, for example, “The OPEC Oil Cartel Is Irrelevant”, July 2008.) What happened last week is a useful reminder that OPEC no longer stabilizes markets the way it may once have. But it is not yet a revelation of a new era.

Juan Cole focuses on the lack of demand for oil:

The cause of the fall, by $40 a barrel, in petroleum prices since last summer is almost completely on the demand side. Asian economies, especially China, are dramatically slowing, and won’t be requiring as much petroleum to fuel trucks, trains and cars to deliver people and goods around the country. Most petroleum is used to fuel transport. Some is used for heating or cooling, as in Saudi Arabia and Hawaii, but that practice is relatively rare. US journalists seem to feel it obligatory to mention US shale oil production as a contributor to the price fall, since prices are a matter of supply and demand, and US supply has increased by a couple million barrels a day. But frankly that is a minor increase in world terms– global production is roughly 90 million barrels a day. Between Iran, Iraq (Kirkuk), Libya and Syria, enough oil has gone out of production to more than offset the additional American oil. It isn’t that there is more oil being pumped, it is that the world doesn’t want it as much because of cooling economies.

Does the slump continue, or is it possible we’ve already overshot and are due for a reversal in oil prices? We can’t be sure, but there are some reasons to think a bounceback could be possible, especially if there’s a European economic recovery. And in the long term, overall fuel consumption is definitely projected to increase, not decline, out towards 2040 — driven largely by demand in developing nations.