The Islamic State’s “Research and Fatwa Department” is circulating a pamphlet on what the jihadis are allowed to do to the thousands of women and girls they have captured and enslaved in their rampage through Iraq and Syria:

Much of the pamphlet talks about ISIS’ policy on having sexual intercourse with a female slave, something that the group cites the Quran to justify. “If she was a virgin, he (the owner) can have intercourse with her 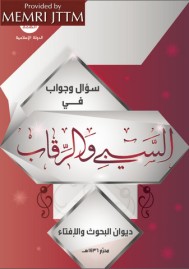 immediately after the ownership is fulfilled,” ISIS explains. “If she was not a virgin, her uterus must be purified (wait for her period to be sure she is not pregnant.)”

An English translation of the evil document, via MEMRI, is available here. Jamie Dettmer notes how many women ISIS is believed to have kidnapped:

According to Nazand Begikhani, an adviser to the Kurdistan regional government and researcher at the University of Bristol Gender and Violence Research Center, ISIS has kidnapped more than 2,500 Yazidi women. Yazidi activists, meanwhile, say they have compiled a list of at least 4,600 missing Yazidi women, seized after they were separated from male relatives, who were shot.

The women were bussed, according to firsthand accounts of women who have managed to flee, to the ISIS-controlled cities of Mosul in Iraq and Raqqa in Syria, and chosen and traded like cattle. Kurdish authorities in northern Iraq say they have freed about 100 Yazidi women. In October, ISIS justified its enslavement of the women—and of any non-believing females captured in battle—in its English-language digital magazine Dabiq. Islamic theology, ISIS propagandists argued, gives the jihadis the right, much in the same way that the Bible’s Ephesians 6:5 tells “Slaves, obey your earthly masters with fear and trembling.”

Katie Zavadski finds some perspective on the ghastly situation:

The pamphlet may be part of a response to a recent condemnation of the group by Islamic scholars from around the word, according to UMass Lowell security studies professor Mia Bloom. Instead of engaging with centuries of Islamic theological debates, ISIS is reverting to seventh-century norms, at which point “women would have fallen under the rubric of war booty.”

She also doesn’t rule out the possibility that some foreign fighters might find these guidelines attractive. “Maybe they think that this is a recruiting tool,” she says, for frustrated men from abroad. But Bloom worries that this cycle of sexual violence will be difficult to stop. “They are creating a very perverse incentive system,” she says, noting the uptick of domestic violence complaints in postwar Serbia.