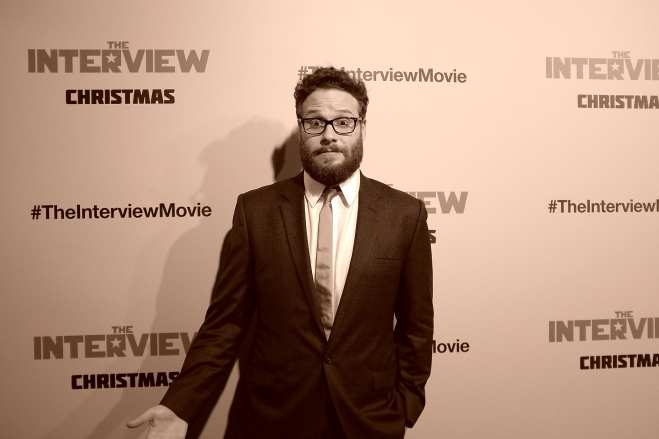 Cyber war expert Peter Singer calls Sony canceling the theatrical release of The Interview “a case study in how not to respond to terrorism threats”:

We have just communicated to any would-be attacker that we will do whatever they want.

It is mind-boggling to me, particularly when you compare it to real things that have actually happened. Someone killed 12 people and shot another 70 people at the opening night of Batman: The Dark Knight [Rises]. They kept that movie in the theaters. You issue an anonymous cyber threat that you do not have the capability to carry out? We pulled a movie from 18,000 theaters.

I sympathize with the theaters’ situation — they’re in the business of showing patrons a good time, and they’re rightly not interested in becoming free speech martyrs, even if there’s only a small chance that they’ll be attacked. Moreover, the very threats may well keep moviegoers away from theater complexes that are showing the movie, thus reducing revenue from all the screens at the complex.

But behavior that is rewarded is repeated.

Thugs who oppose movies that are hostile to North Korea, China, Russia, Iran, the Islamic State, extremist Islam generally or any other country or religion will learn the lesson. The same will go as to thugs who are willing to use threats of violence to squelch expression they oppose for reasons related to abortion, environmentalism, animal rights and so on.

Fred Kaplan wonders how far this will go:

Will hackers now threaten to raid and expose the computer files of other studios, publishers, art museums, and record companies if their executives don’t cancel some other movie, book, exhibition, or album?

[P]roduction on a new thriller starring Steve Carell and based in North Korea has now been cancelled. So film studios are afraid that what happened to Sony will happen to them. It is easy to imagine that studios and publishers will be intimidated into canceling or never taking on all kinds of projects on a wide variety of topics, simply out of legitimate fear of cybercrime or worse. Troubling.

This decision was driven as much by placating theatre owners as much as anybody else, but it also has the effect of essentially writing off a whole area of the map.

What happens when someone wants to make a dumb action movie set in North Korea? Or a romantic comedy on both sides of the Korean border (as improbable as that would be)? Or a serious, weighty political drama about the struggles of the North Korean people, aimed at winning some Oscars? What do the bean-counters say then?

(Photo: Seth Rogen arrives at the Los Angeles premiere of ‘The Interview’ held in Downtown LA on December 11, 2014 in Los Angeles, California. By Araya Diaz/WireImage)