Alison Griswold says New Year’s Eve is both the best and worst night for Uber: 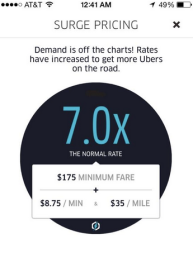 internal documents obtained by Business Insider. This year, Uber has extended its reach to 266 cities and 53 countries. It’s projecting 10 times more rides than it delivered in 2013. Since the surges could be different this year than in 2013, you can’t really extrapolate those numbers to project how much revenue Uber is likely to make tonight. But clearly, it will be a lot.

So in terms of the financials, it should be pretty clear why New Year’s Eve is the best night of the year for Uber. But looking at [CEO Travis] Kalanick’s Twitter grief from last year, it should also be evident why it’s the worst. No matter how many times you explain that surge pricing does not take unfair advantage of drunk people, they are still bound to get upset by exorbitant fares. Spiking fares also incentivize drivers to forgo their own New Year’s celebrations to pick up passengers and provide safe transport. I’ll hazard a guess that people wouldn’t be too happy if Uber rides were as hard to come by as standard taxicabs on New Year’s Eve. And Uber, to its credit, is trying harder than ever this year to warn customers about high surges and advise them on the times when it will likeliest be the most expensive to hail a car.

If Uber and Lyft charged the same rates on New Year’s Eve as they did on a typical night, the result would be people facing long waits to get home. Indeed, that’s how things worked in major cities in the pre-Uber world:

when you tried to take a cab home from your post-New-Year’s bash, you’d find that all available cars were taken. Surge pricing addresses this problem by setting prices high enough to bring supply and demand in balance, ensuring that you can always get a ride if you’re willing to pay enough. To some extent, this means that richer people get rides and poorer people don’t.

But that’s not the only factor affecting peoples’ willingness to pay. For example, some people have an inconvenient-but-doable option to get home — a 30-minute walk, say, or a bus ride — while others’ only option to get where they’re going is by taxi. At the margins, surge pricing will cause people who can get home some other way to do so, reserving the taxi rides for people who don’t have alternatives.

Ilya Somin wonders if people will ever be okay with surge pricing:

If Uber surge pricing does become established over time, it is possible that people will come to accept it as “normal,” and opposition may potentially diminish. That may be the reason why few people protest increased prices at hotels during peak vacation season, or increased prices for plane tickets at times when more people fly (though the relative lack of protest may also be because these price increases are less visible to consumers than Uber’s practices). At some point, status quo bias might outweigh the effects of biases cutting the other way. But before Uber surge pricing can start to benefit from status quo bias, it has to survive long enough to begin to seem “normal.” That may not happen if protestors get their way, and government forces the firm to abandon surge pricing before it becomes well-established.

Previous Dish on the practice here.