Steven Pinker praises Shakespeare as “one of our first and greatest psychologists,” especially dwelling on the wisdom of a few lines from Measure for Measure:

[W]e humans are the last to notice our own limited nature. In seven words, Shakespeare sums 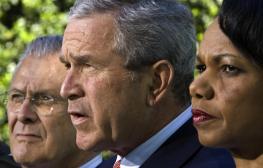 up a good portion of the findings of modern psychology: “most ignorant of what he’s most assured.” A recurring discovery of social and cognitive psychology is that human beings are absurdly overconfident in their own knowledge, wisdom, and rectitude. Everyone thinks that he or she is in the right, and that the people they disagree with are stupid, stubborn, and ignorant. People reliably overestimate their own knowledge, and misjudge their own accuracy at making predictions. A common theme of both Shakespeare and modern social psychology is the human species’ overconfidence.

Remarkably, Shakespeare identifies this darker side with what we now know to be our evolutionary ancestry. With “like an angry ape,” he compares us to our primate cousins (an impressive 250 years before Darwin). What a striking simile for human impetuousness and foolishness! We tend to dignify displays of human emotion; presented with a burst of feeling, we seek its cause. But an angry ape we look on with amusement—the rage is infantile, comic, the result of ape’s own limited understanding. The detached amusement at the absurdity of human acts continues in the next line—“plays such fantastic tricks before high heaven.” “Playing a trick” refers to something lighthearted, trivial. Our feeble attempts at wisdom and justice, our petty exercise of power, appear ridiculous to wiser, celestial onlookers.

(Photo: US President George W. Bush delivers remarksfrom the South Lawn of the White House on May 1, 2006 regarding a recent trip to Iraq by US Secretary of Defense Donand Rumsfeld and US Secretary of State Condoleezza Rice. Three years after his famous photo-op before a banner hailing “Mission Accomplished” in Iraq, Bush declared that the war-torn country had finally turned a corner in establishing security and democracy. Paul J. Richards/AFP/Getty Images)