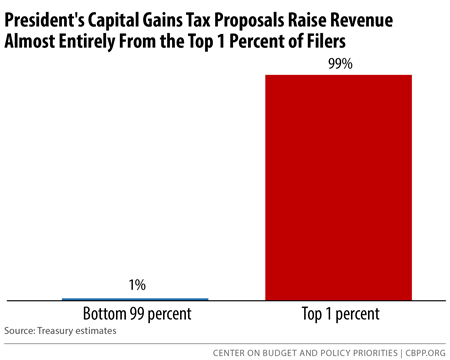 Mark Whitehouse spells out how the richest benefit from our current tax system:

Taken together, the capital-gains and inheritance-tax breaks were worth more than $200 billion in 2013, the Congressional Budget Office estimated. The benefits accrued almost entirely to the rich: They boosted the after-tax income of the top 1 percent by more than 6 percent, and had an almost negligible effect on the lowest-earning 40 percent of U.S. households.

According to the Congressional Budget Office, as of 2011, the top 1 percent of income earners in the U.S. get more than a third of their income from capital gains. For context, the typical annual income for those in the top 1 percent is about $1.4 million.

In earning so much from the sale of investments, the wealthiest 1 percent are an outlier: 36 percent of their income comes from capital gains. Those with incomes in the 96th to 99th percentile — who earn about $300,000 per year — only earn about 10 percent of their income from investments. That share is even lower for those below the 90th percentile.

Annie Lowry looks at how Obama’s proposals would impact the Romneys:

Taken together, these proposals and others would not just take aim at the wealthiest earners in America. It would take aim at dynastic wealth – the accumulation of investment assets and their light-tax passage to the next generation. It is a timely concern, one thrust into the spotlight last year by Thomas Piketty and his surprise bestseller on inequality, Capital in the Twenty-First Century. Right now, American wealth inequality is primarily driven by American income inequality. Big earners purchase houses, stocks, businesses, and other assets that swell in value over time. Inheritances don’t actually figure much into the equation. In fact, wealth transfers as a proportion of overall net worth have fallen from 29 percent in 1989 to 19 percent in 2007. But in the future, inherited wealth stands to become a bigger and bigger deal, as all those corporate executives like Mitt pass away and pass their money on. Accenture, the consulting firm, anticipates a wave of transfers totaling more than $10 trillion coming in the next decades.

That means Obama’s proposal would not just tax Romney more heavily today, it would limit his ability to create dynastic wealth for his heirs. Robin Hood, I think, would approve.