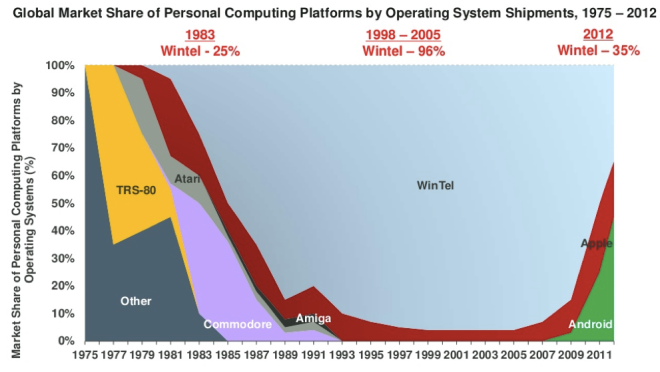 Microsoft CEO Steve Ballmer announced on Friday that he’s retiring. Derek Thompson explains the decision with the chart above:

Windows, along with Intel, got its clock cleaned by Apple and Google in the last decade. Their global market share of operating systems fell from 96 percent around 2000 to 35 percent in 2012. Apple and Google wedged their way into our laptops, phones, and tablets, while Microsoft saw its sliver of the mobile market decline between 2005 and 2012.

Ballmer’s larger problem is that throughout his 13-year tenure, he was swimming against some very powerful economic currents. His company’s fate was inextricably tied to the success of the PC, and the PC’s fortune peaked with the Nasdaq around 2000. The emergence of interactive Web applications around 2004 began to turn PCs into interchangeable commodities. Then Apple introduced the iPhone in 2007, and the iPad three years later, kicking off a tablet computing boom that left the PC in the dust.

These developments were a classic example of what Clay Christensen called disruptive innovation: cheap, simple innovations that gradually displace a more complex and expensive incumbent technology. History suggests that firms rarely survive when their core product is undermined by a disruptive technology.

The story of Microsoft under Steve Ballmer can be told in two very different ways.

The one that took center stage in the public eye narrated Microsoft’s slow response to emerging, low-end software disruptors like Google Apps and Amazon Web Services; a missed mobile-device wave led by Apple and Google, which dramatically weakened the Microsoft monopoly; and a series of failed service launches like the Zune, Windows Vista, and more.

The other version of the story is the lesser told of the two. Microsoft more than tripled its annual revenue under Ballmer, from $22 billion annually when he took over to $78 billion when he announced his departure. It was with Ballmer at the helm that Microsoft also began to embrace the cloud, launching successful online services and platforms like Office 365 and Azure, and purchasing compelling technologies and companies like Skype and Yammer. Microsoft’s negligible market share in search grew to 30 percent through clever maneuvers like securing all of Yahoo and Facebook’s search traffic. Microsoft also secured the only corporate investment ever made in Facebook. Under Ballmer, Microsoft even began to embrace open source and other competing platforms.

However, in this binary world where you’re either up or you’re down, we must have losers to bolster our winners. Even during the peak of its recent successes, the stock market voted that Microsoft was not the victor.

Simply put, the new CEO for Microsoft will be in a tough spot. The company isn’t a disaster where there will be a 2-year honeymoon just to stabilize the patient. The new CEO won’t look like a savior because Microsoft doesn’t need to be saved. The CEO following Ballmer will be more akin to Virginia Rometty taking over at IBM as CEO than Marissa Mayer at Yahoo or Meg Whitman leading HP out of the abyss.

However, Microsoft also isn’t firing on all cylinders and is transforming its approach. Microsoft is a tweener company that should arguably be broken up. In many respects, the new CEO is like an NFL coach taking over a 10-6 team. You either win a championship or you fail.