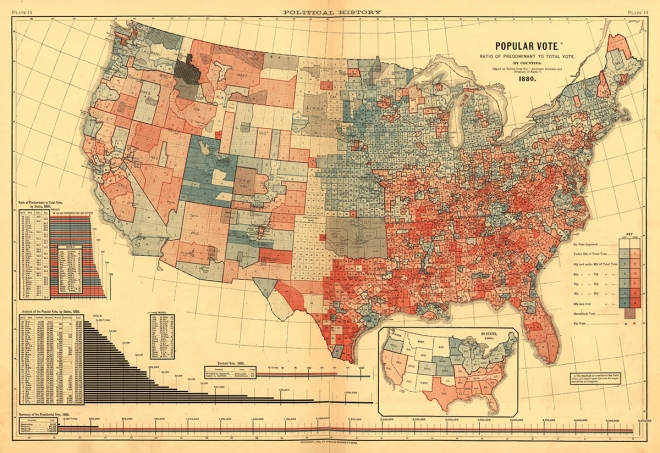 While flipping through “Scribner’s Statistical Atlas of the United States,” first published in 1883, Susan Schulten marvels at the above map from 1880, “the first American attempt to map the outcome of an election”:

The Popular Vote map was the creation of Henry Gannett, superintendent of the census and future president of the National Geographic Society. It was the first map to use shading techniques to visualise American political behaviour. I was struck by the spatial patterns:

the dense chequerboard of eastern counties contrasting sharply with the open crazy-quilt patchwork out West. Then my eye was drawn to the patterns of colour in the eastern states. Just as now, red and blue were used to show which party had prevailed in each county.

The map even looked a little like the 2012 electoral picture, with a preponderance of blue through what we now regard as the Democratic stronghold of the north-east, and red spilling across the Republican South. It took a minute to see that the colours were reversed: here red represents the Democrats and blue the Republicans. So while the map looks familiar, the political landscape has flipped. … [I]t was not until the election of 2000 that NBC’s “Today” show indelibly fixed the colours of American politics: red for the Republicans and blue for the Democrats.

I find it fascinating that Utah is one of the only locations that has completely switched (or didn’t switch, depending how you look at it). It’s an interesting artifact of Mormon history and the change of it’s theology and relationship to American culture.