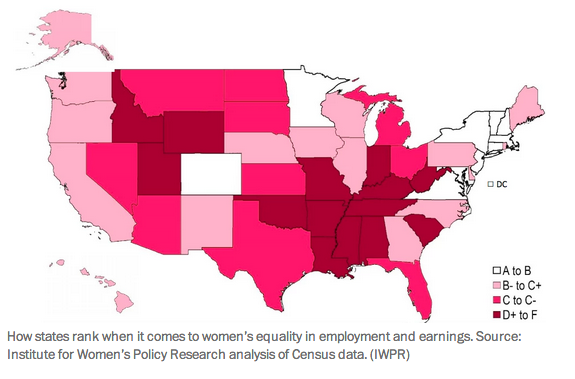 Niraj Chokshi illustrates how the best states for female workers are in the Northeast:

Massachusetts had the highest score [for women’s earnings and employment] among states, according to the analysis of four factors conducted by the Institute for Women’s Policy Research. (D.C. scored even higher, though many argue it is better compared to other cities.) All but four of the 10 highest-scoring states – Maryland, Minnesota, Colorado and Virginia – were in the Northeast. Sixteen states earned a B- or higher. West Virginia ranked dead last and, along with Alabama, received an F. The composite scores, excluding D.C., ranged from 68.5 to 90.5, on a hundred-point scale.