Below are the finalists we’ve selected for the 2013 Chart Of The Year. Please review them and then vote for your favorite at the bottom of the page.

1) Black Men In College vs Prison:

Ivory Toldson discovers that, contrary to popular belief, there are far more black males in college than prison. He thinks the myth has perverse effects:

Consider this: If all 1,127,170 black males who were enrolled in undergraduate programs in 2010 eventually graduated, the total number of black males with college degrees would increase by 71 percent, nearly achieving parity with white males. However, we will not sufficiently support black male college students — nor college-bound students — if we simply keep perpetuating the myth that juxtaposes their needs with those of black males in the criminal-justice system.

2) Public Knowledge About The US Deficit:

Most Americans have no idea that the deficit is falling: 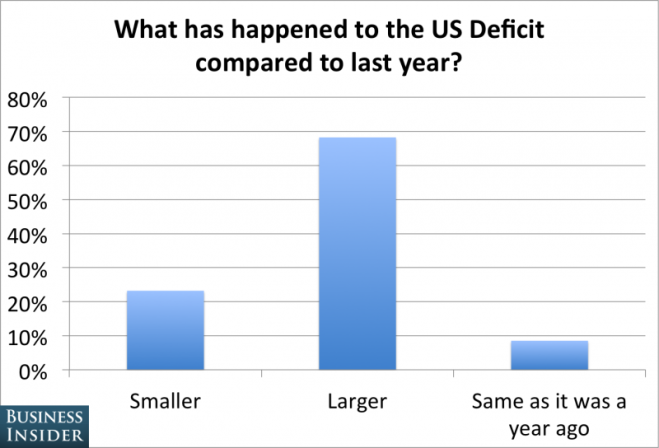 The point isn’t that Americans are stupid. They have busy lives and concerns that have nothing to do with the annual gap between taxes and outlays. Instead, the point is that public-opinion polls don’t belong on the same plane as facts and informed analysis, because they qualify as neither. … Public polls are a fine gauge of public opinion, but they’re not to be treated as a barometer of reality. Pretending otherwise mixes up the regurgitated misinformation of readers with the careful analysis of people who are in the business of busting misinformation. 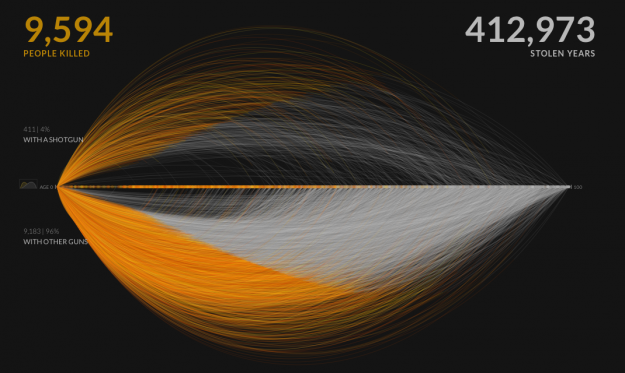 Nathan Yau admires a chart on US gun violence:

Information visualization firm Periscopic just published a thoughtful interactive piece on gun murders in the United States, in 2010. It starts with the individuals: when they were killed, coupled with the years they potentially lost. Each arc represents a person, with lived years in orange and the difference in potential years in white.

James Plunket passes along what he calls “the scariest chart in the world right now”: 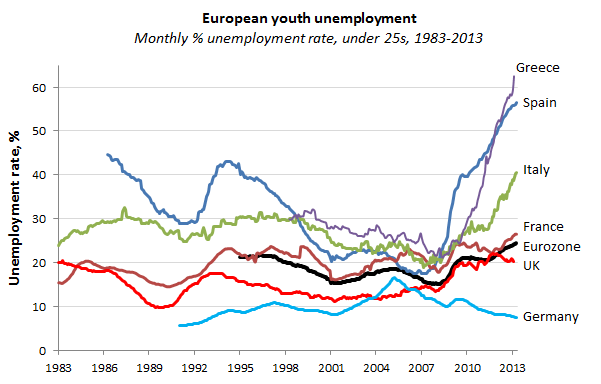 Youth unemployment is bad for all the obvious reasons, including the big loss to future productivity and earnings. But Europe’s youth unemployment is strange, because we’ve never seen a generation *this educated* also be this unemployed. Nearly 40 percent of Spain’s 20-and early-30-somethings are college educated. In Greece, it’s 30 percent. Europe’s crisis — clearly worsened by its austerity obsession — is an absurd waste of the most educated generation in the continent’s history. 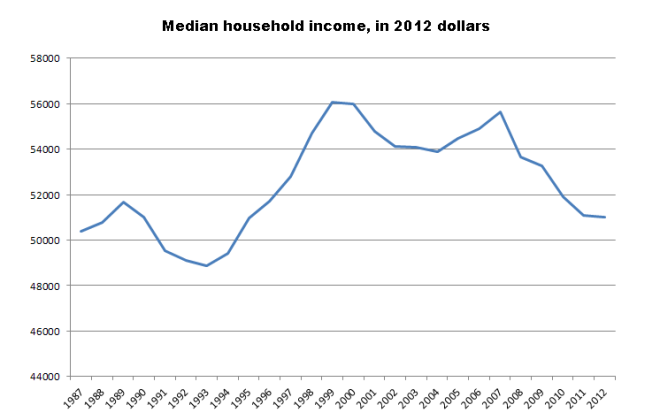 Neil Irwin passes along a depressing one:

This chart shows real median household income over the past 25 years; that is, the money earned, in inflation-adjusted dollars, by the family at the exact middle of the income distribution. … In 1989, the median American household made $51,681 in current dollars (the 2012 number, again, was $51,017). That means that 24 years ago, a middle class American family was making more than the a middle class family was making one year ago. 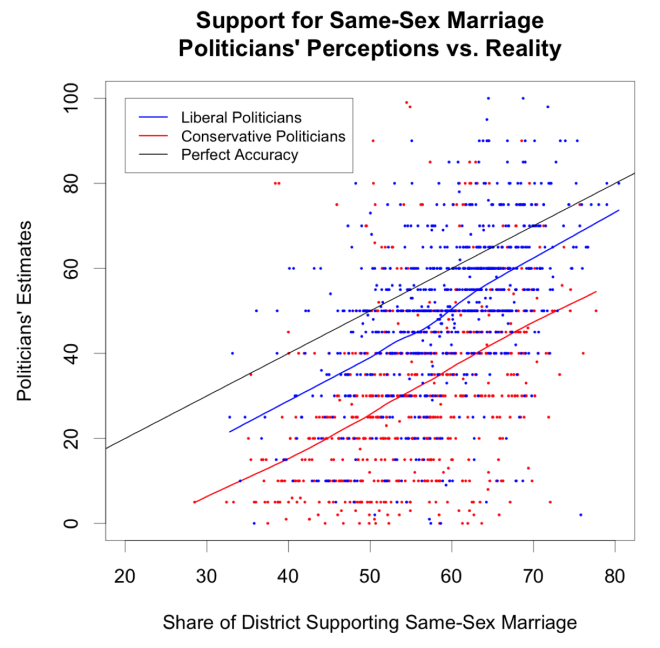 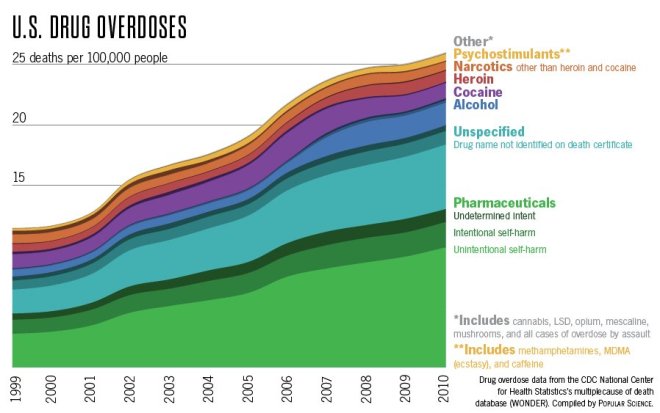 As part of Popular Science’s “Drug Week” coverage, Katie Peek parses the data on drug overdoses, which have more than doubled since 1999:

About half of those additional deaths are in the pharmaceuticals category, which the CDC has written about before. Nearly three-quarters of the pharmaceuticals deaths are opioid analgesics—prescription painkillers like OxyContin and Vicodin. And while cocaine, heroin and alcohol are all responsible for enough deaths to warrant their own stripes on the chart, many popular illegal drugs—including marijuana and LSD—are such a tiny blip as to be invisible.

If recent volume trends continue, many experts say we will see a “near ice-free Arctic in summer” within a decade. Recent research finds that may well usher in a permanent change toward extreme, prolonged weather events “such as drought, flooding, cold spells and heat waves.”

Information Is Beautiful displays the major causes of death throughout the 20th century (click to see the whole chart): 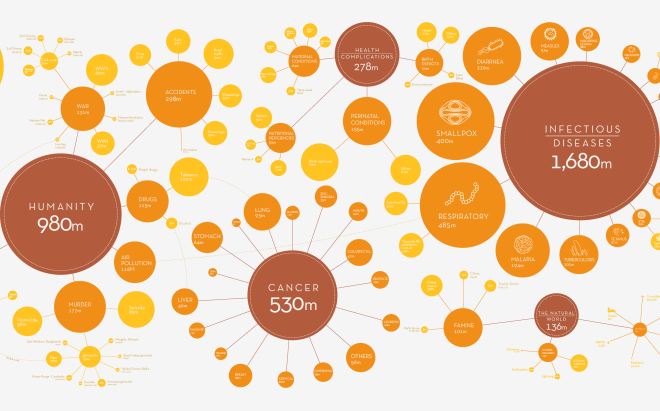 The notoriously bloody 20th century was a lot less sanguinary than previous eras, when up to 15 percent of people lost their lives in violent conflicts. And things have gotten a lot better still since the end of World War II. Why the improvement? Pinker lists a host of positive influences, from rising IQs and the expansion of women’s rights to surges in global commerce and literacy. All these trends have pointed us away from the Devil and closer to the “better angels of our nature.”

And what is responsible for these trends? Governments! Good old-fashioned nation states, Weberian monopolies on violence. It turns out one of Hobbes’ central contentions was dead right: the most important function of political society, its primary mission, is to bring peace. 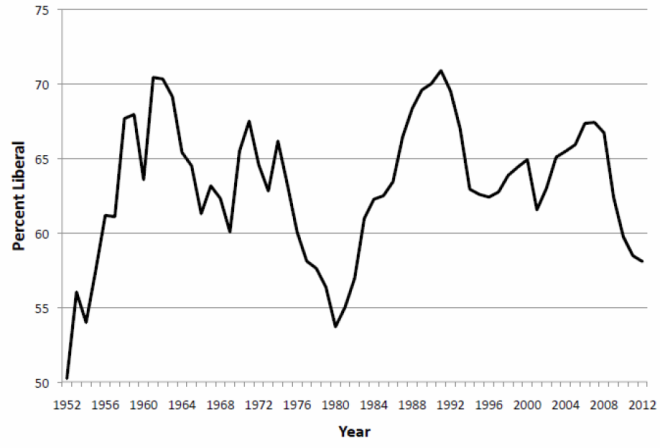 John Cluverius describes the Policy Mood (seen above), which “is calculated by aggregating hundreds of survey questions” and “captures shifts in the the popularity of increased government action over time”:

One of the key aspects of policy mood is that tends to react against prevailing government policies. Christopher Wlezien described this response as a “thermostat”: after the government does more and spends more, policy mood becomes less liberal; after the government does less and spends less, it becomes more liberal.  This effect has been discussed in greater detail previously on this blog and others. In particular, the public’s policy mood responds to changes in party control of the White House.  The public becomes more liberal during the administration of Republican presidents, and more conservative under the administration of Democratic presidents.

Chart Of The Day archive here. Last year’s winner here. Vote for the rest of our 2013 awards below: