Below are the finalists we’ve selected for the Cool Ad Of The Year, please review them and then vote for your favorite at the bottom of the page.

David Gianatasio is struck by the latest bit of brilliance from the New Zealand government:

This eerie safe-driving PSA from New Zealand employs an Outer Limits-style time freeze to impressive, heartbreaking effect as we watch two drivers, poised to collide in a matter of seconds, emerge from their vehicles and discuss the situation. … “This campaign aims to reframe the way people look at their speed when they’re driving,” the New Zealand Transport Agency says. “We usually get to learn from our mistakes, but not when driving—the road is an exception. Even the smallest of mistakes on the road can cost us our life, or someone else’s.” The spot, by Clemenger BBDO, marks a departure from the agency’s recent work for the client, which successfully used humor and charm to highlight the dangers of driving while stoned. Here, the tone is intensely serious, and the riveting results are memorable and stand up to repeat viewings.

From a campaign for the animal welfare non-profit CARA, with the tag-line, “Same Dog, Different Owner”: 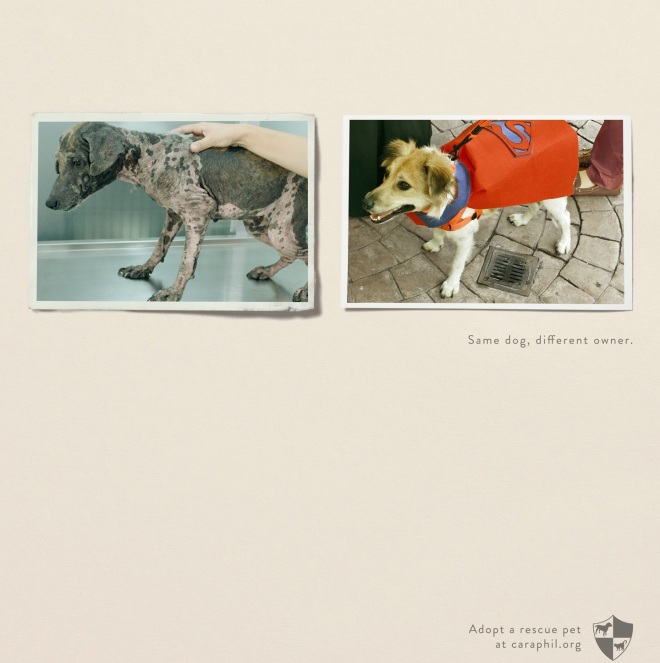 Andy Cush captions the first mainstream TV ad for marijuana aired in the US:

The above minute-long spot for MarijuanaDoctors.com began airing yesterday on CNN, Comedy Central, The History Channel, and A&E in New Jersey, making it the first weed commercial to be shown on major U.S. TV networks. In it, a fast-talking faux drug dealer slings high quality raw fish in back alleys before a voice-over asks, “You wouldn’t buy your sushi from this guy, so why would you buy your marijuana from him?” Then, of course, you’re directed to check out the company’s site, which hooks up patients with medical cannabis doctors.

It isn’t the first weed commercial ever to air in the U.S., however: back in 2010, the Sacramento dispensary CannaCare ran a spot advertising its services on local Fox affiliate KTXL. And it didn’t even use the m-word.

A simple and startling ad from the stop-motion genius PES:

A slick compilation of dance moves from A to Z:

A reader flags it:

In light of today’s big Apple news, this ad is perfect.

Not cool so much as powerful:

With the United Nations General Assembly meeting next week, the world’s leading NGOs—Oxfam, Save the Children, Care, Amnesty and a hundred more—have banded together for a new PSA, directed by [Martin] Stirling, that attempts to capture the horrors being endured by ordinary Syrians on a daily basis. … The stylistic choice of using reverse footage almost becomes a moral choice here—it’s the hook that makes the piece haunting, and shareable, and thus capable of making a difference. The film is the centerpiece in the NGOs’ #WithSyria campaign, which drives viewers to a petition asking the UN Security Council to take next steps to protect civilians.

Stirling’s previous ad calling attention to the plight of Syrian civilians is here.

Browse our Cool Ad archive here. Last year’s winner is here. Polls will close on Wednesday, December 31, at midnight. Winners will be announced soon after. Be sure to vote for the rest of our 2014 awards below:

Please note: due to there not being enough nominees this year, we will not be issuing a 2014 Hewitt Award, Moore Award, or Dick Morris Award. Learn more about all our awards here.